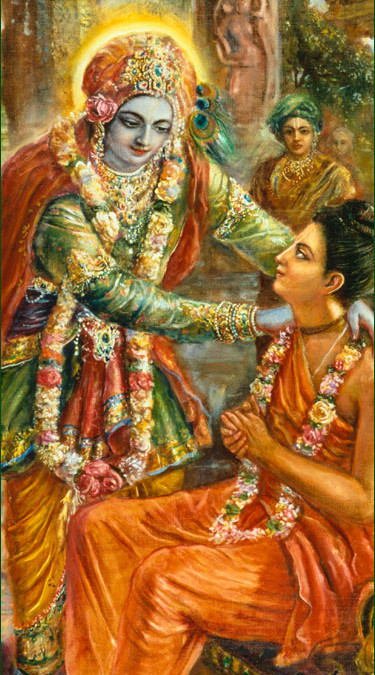 Once Narada Muni who is very intimate devotee of the Lord has meet Krishna.

And while they were walking, Narada Muni asked Lord Krishna, “My dear Krishna, can you please show me power of your maya, your illusiory energy? Please explain to me the secret of this magic called maya and how she act?”

Sri Krishna hesitated to do it. So Krishna asked his dear devotee:

My dear Narada are you sure you want to see power of my maya!?

Narada was very detirmened so he said: Yes, Krishna i am sure. I want to see power of your maya!

Lord Krishna replied : Ok Narada i will show you. Let’s lie down here in the shade and I shall tell you everything. But first, Narada, it’s terribly hot; would you get me a cool glass of water?”

“Right away,” Narada promised happy to do some serviceto his beloved Lord krishna. He set out across the fields. The sun beat down and though he was a good walker, the little line of thatched cottages on the horizon that marked the nearest village seemed no closer as he strode along. The heat grew unbearable. Narada’s throat became parched too; he began to think that he would ask for two glasses of water, and drink the second himself.

Finally he reached the village and ran to the nearest house. The door opened – and there stood the most beautiful girl he had ever seen. She smiled up at Narada through long, dark lashes and something happened to him that had never happened before. All he could do was to look at her beatiful face. Finally he spoke out, “Will you marry me?” That is the Indian way; you cannot just say, “What are you doing on Saturday night?”

The couple settled down to a life of family bliss. After a while, children began to arrive. Narada’s became a very animated household.

Somebody was always being bathed or dressed; there were meals to get and people to be provided for. And all these things were filling up their lives. Narada and his wife became engrossed in their private little world, quietly building their dreams. Years passed. The children grew up, went to school, got married; in time, grandchildren arrived. Narada became the patriarch of a great family, respected by the whole village; his lands stretched to the horizon. He and his wife would look at each other fondly and say, “Don’t you think being grandparents is the greatest thing on earth?”

Then a flood came. The village fields became a raging river, and before Narada’s helpless eyes, everything that he loved and lived for – his lands, his cattle, his house, but especially his beloved wife and all their children and grandchildren – were swept away. Of all the village, only he remained.

He was trying to save them from all this calamities but was not successful.

Unable to watch the destruction, Narada fell to his knees and cried for help from the very depths of his heart.

At once, the raging floods disappeared and there was Sri Krishna, standing casually on the fields where they had walked what seemed to be so many years before.

“Narada,” the Lord asked gently, “where is my glass of water?”

This is power of maya. She make us forget lotus feet of Krishna. She overcome us and we forget our Lord. We have done this for millions of lives in this material wolrd. It has been our desire to be in maya as Narada wanted to see her. We are all in situation as great sage Narada have in this story. To be free from this illusion of the Lord we must cry his holy name:

This divine energy of Mine, consisting of the three modes of material nature, is difﬁcult to overcome. But those who have surrendered unto Me can easily cross beyond it.