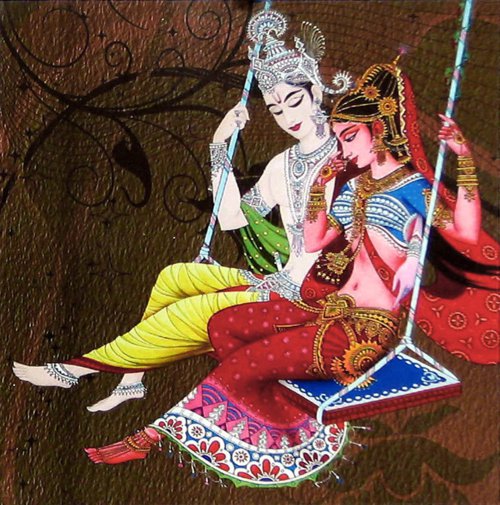 Once Krishna warned Radharani that she should be careful about associating too closely with Narada Muni, because he is expert at instigating disputes between people.

Radharani did not take his warning seriously.

One day Narada Muni came to Braja hoping to be fortunate enough to see some of the Lord’s pastimes.

Krishna, hearing the sweet singing of Narada, granted him a wish.

Narada told Krishna that his only request was to see Lalita and Him sitting side-by-side swinging together.

That day Radha was late in meeting with Krishna, so Krishna decided to fulfill the desire of Narada and swing with Lalita.

Lalita did not want to do this, but Krishna insisted.

Krishna then sat next to Lalita and they were swung together.

Narada Muni saw them swinging together. He immediately went to he house of Srimati Radharani and told her that Lalita Devi was swinging with Krishna. He told her to go to Lalita Kunda and see what was happening.

She immediately ran there and seeing Lalita and Krishna swinging together, she became very angry and ran away.

Krishna then tried to pacify her, but she did not want to hear anything He had to say.

He then told her that Narada Muni had requested Him to swing with Lalita, and that Narada was so expert at causing quarrels that he had fooled even her. He told her that He hoped that in the future She would not trust Narada again.