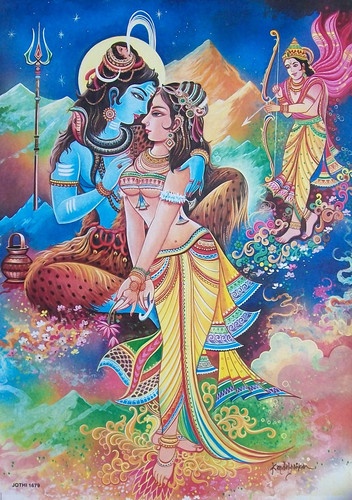 BACKGROUND TO THE KATHA
Parvati Devi has witnessed the destruction of Kaamdeo by Shankar Bhagwan. With the burning of the personification of desire,  and with Lord Shiva leaving Himachal Parvat, Pravati was dejected and returned home in sorrow. Her grief at her failure to win the hand of Lord Shiva knew no bounds and she blamed herself crying loudly “of what use is my beauty, my service to The Lord, my very birth and life itself”.

NARAD MUNI’S DIAGNOSIS OF HER PLIGHT
With the arrival of Narad Muni at her home, Parvati Devi confided in him about her sorrow. He explained that her motive was pure. Her actions were noble. However one thing was lacking in her attempt to win The Lord’s grace. There was no TAPASYA in her attempt. What she has done was great and was a fitting start to her spiritual journey, but the single-minded dedication to the pursuit of her goal was missing. His advice to her was to return to that place where Kaam was destroyed, and even though Lord Shiva was not physically present, it was the ideal environment to fulfill her objective of winning His hand in marriage.

NARAD MUNI’S INSTRUCTION
Parvati Devi approached Narad Muni as a student approaches a Guru and asks for his help. Narad Muni was a fitting Guru because he had also experienced a glimpse of Divinity but was denied full realization in an earlier time. With his experience of what is needed to gain that type of development, he was able to instruct Parvati Devi suitably. He taught Her the Panchakshari mantra – NAMAH SHIVAAYA and also its greatness. He stressed the rigorous penance needed to achieve Her goal, and the constant prayer and meditation that must accompany her practice.

Moral of the story:
The account in the Shiva Purana of Parvati Devi’s penance to win the grace of Lord Shiva is very similar to the Churning of the Ocean Katha of the Bhagwat Purana where the Devas were trying to obtain the Amrit of Immortality from God. Both of these kathas are metaphors of the spiritual journey of a devotee towards God Realization.

In the Bhagwatam, the Devas sought the help of Lord Vishnu to free themselves of the misery of constantly losing battles to the asuras, and His advice was to churn the ocean. After overcoming some initial obstacles, the churning began in ernest with Lord Vishnu himself lending a hand in the churning process. Then there occurred a major setback or obstacle in the form of the Halahal poison emerging from the ocean.

In the Shiva Puran, Parvati Devi was born with the desire to regain Her position at the side of Lord Shiva and she also had to overcome some minor obstacles in getting the opportunity to perform her devotion to Him. Once these obstacles were removed, her service to The Lord began. With the interference of Kaamdeo there was a major setback to her attempts when Kaam was destroyed and Lord Shiva left the scene.

In the Bhagwatam the Devas needed the advice Lord Vishnu to overcome their fear of the poison of the ocean and continue the churning process. In the Shiva Purana, Parvati Devi needed the advice of Narad Muni to renew her efforts to win the grace of Lord Shiva.

Similarly every devotee has the knowledge that he must pursue his spiritual development. Initially his attempts to achieve this meet with some minor obstacles in the form of distraction and attraction to the materialism of the world in which he lives. However these obstacles are easily overcome and the devotee pursues the spiritual path to the best of his ability, even though it may be half-hearted at times. Occasionally, as with the Devas and as with Parvati Devi there may be a major setback in his spiritual journey, which re-inforces the needed for much greater effort and dedication .