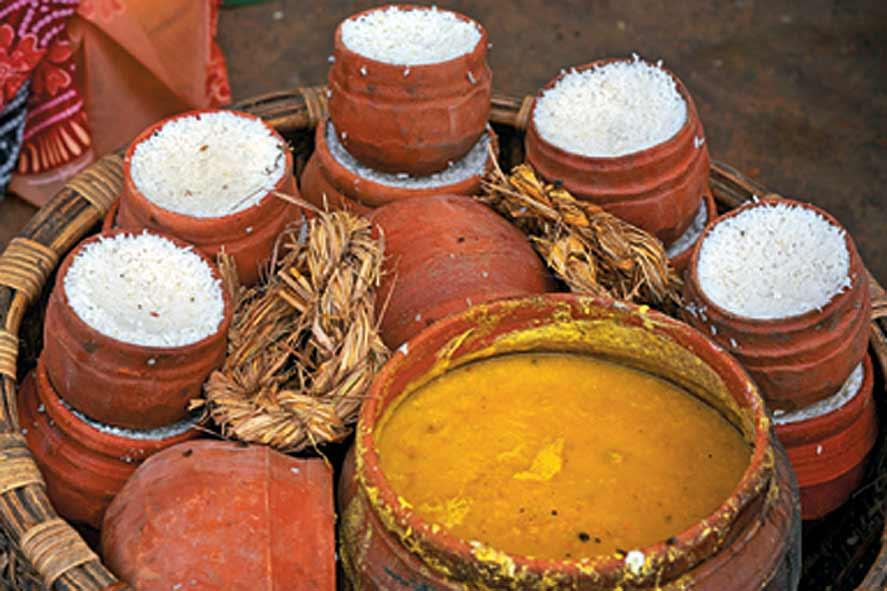 Narada Muni once went to Vaikuntha and served Mother Laxmi very attentively. Sri Laxmi was very pleased and requested Narada Muni to ask for any boon. Narada Muni replied, “My dear Mother Laxmi, you must promise that whatever I ask for, you will grant.” Laxmi Devi wowed that she would gladly fulfill his desire. The great saint revealed his wish: Narada Muni requested Laxmi Devi to give him the maha-prasada remnants of Lord Narayana.

Suddenly Laxmi Devi’s mood changed and her face became clenched with worry. “Please ask me for anything else except for the Lord’s prasada,” she begged. “A few days ago the Lord in¬structed me not to give His prasada to anyone. You must under¬stand that I cannot disobey my husband’s order. My dear son, 1 cannot give you prasada” Narada was very adamant and reminded Devi of her promise. “You are the dear wife of Lord Narayana,” Narada Muni said. “You must grant me this boon. Somehow or another you must give me the Lord’s maha-prasada” Laxmi was now in great trouble. What to do? She told Narada Muni to wait and that she would look into what could be done to satisfy his desire. At noon Lamxi Devi lovingly served lunch to her husband, Lord Narayana. Even though Devi performed her duties with at¬tention and expertise, still the Lord marked that his wife was very unhappy. Her face had become black and morose. Lord Narayana gently asked her the reason for her distress. Taking shelter at the Lords lotus feet, Laxmiji explained her predicament. Lord Nara¬yana mercifully comforted His crying wife and said, “Just lor today I will cancel this restriction. You may take My plate of remnants and give it to Narada. But you must deliver the prasada in such a way that I do not see. When I turn my face to the side you may take the plate away as if I do not know.” The goddess became joy¬ful. Following her beloved husbands instruction, she deftly re¬moved His plate of remnants when He was not looking.

Laxmiji immediately took the maha-prasada plate and hap¬pily presented it to Narada Muni. Narada Muni, dancing in ecstasy, eagerly honored the Lord’s remnants. He relished Lord Nara-yana’s prasada, and did not cease for second from chanting the Lord’s holy name and dancing in great bliss. As his ecstatic emotions increased, he could not control himself. Narada Muni with his vina in tow started running all over the universe like a madman. Chanting and dancing without stopping, he ran from planet to planet.Finally he reached Mount Kailash, the abode of Lord Shiva. Lord Shiva was surprised to see Narada Muni chanting and danc¬ing in such a state of ecstasy. Narada Muni, swimming in the waves Vishnu-bhaka, did not notice Lord Shiva. Lord Shiva pacified Na¬rada Muni. “Narada, I know you are always in ecstasy because you constantly chant the name of Lord Narayana. But I have never seen you in such a condition! What happened to you?” Then Narada Muni cooled down and explained everything. “I got so much pleas¬ure and ecstasy after honoring the Lords maha-prasada that I can’t stop dancing and chanting,” Narada breathlessly exclaimed. Lord Shiva, folding his palms replied, “Oh Narada! You are so fortunate that you have tasted the mahaprasda of Lord Narayana.” Lord Shiva smiled hopefully. “Dear Narada, have you brought any prasada for me?”

Narada felt very sorry for he had not brought any prasada to share with Lord Shiva. Putting his head down, Narada stood with folded hands before Lord Shiva. Then he saw that a morsel of prasada had stuck to his fingernail. Narada gasped, “Oh yes! Here is some prasada! Prasada kanika matra. A morsel of prasada just for you.”

Narada Muni carefully held up his hand for Lord Shiva’s inspection. “Oh Shiva. You are so fortunate. Please take this maha-prasada.”Narada Muni put his finger into Shivaji’s mouth. As soon as that small morsel of maha-prasada touched the tounge of Ma-hadeva, he felt great ecstasy and happiness, so much so that he could not remain quiet. Lord Shiva started to chant and dance. His dancing increased as his ecstasy intensified. His dancing became so vigorous that he manifested the Tandava, the dance indicating the time of annihilation. The whole universe started to shake. Everyone became frightened, thinking “What happened? Why is this dance is taking place untimely? It is not time for the annihilation.”

No one was brave enough to stop Shivaji from dancing the annihilation dance. The devas begged Mother Parvati to pacify the lord, otherwise the whole universe would be destroyed. Mother Parvati arrived on the scene and saw Lord Shiva dancing in uncon¬trollable ecstasy. Mother Parvati humbly approached Lord Shiva, and when he came to his external senses, she inquired, “My dear husband! What happened to you? What has caused you to dance in such ecstasy?” Lord Shiva explained that he had received Lord Na-rayana’s maha-prasada from Narada Muni. Parvati Devi became astonished. “My dear husband, have you kept any maha-prasada for me?” Lord Shiva could not answer. He had managed to get only one morsel of prasada from Narada. How could he have saved any?

Parvati was angry that she did not get maha-prasada. “I am de¬prived of Lord Narayanas prasada.”She was so furious that the fire of her anger started to burn the whole universe. From the lower planets to the higher planets, everyone felt the burning heat. The sages and saints understood that everything was going to be fin¬ished by the hot anger of Mother Parvati. No one could pacify her.

Finally all of the demigods headed by Lord Brahma rushed to Vaikuntha to inform Lord Vishnu. Hearing the situation, Lord Vishnu traveled to Kailash riding on the back of Garuda. As soon as Parvati Devi saw Lord Narayana, she came forward to offer her obeisances. Lord Narayana blessed his devotee and told her, “I will give you as much as maha-prasada you want. Please be pacified and give up your anger. Otherwise, all of your children will be fin¬ished.” But Motiier Parvati protested. “I will not be satisfied if You give your maha-prasada only to me. I request You to give your maha-prasada to all of my children, to all of the living entities. I do not want to see any of my children suffer like I am suffering now due to being deprived of your maha-prasada. You must arrange something so that all living beings, including the dogs may honor Your maha-prasada”

Lord Narayana smiled and said ” Tathastu. Let it be so. My dear Parvati, to fulfill your desire I will appear in Nila-chala-dham. My temple will be famous for distributing My prasada. Whoever takes My prasada will be liberated. All of my prasada will be of¬fered to you first. Then only will the remnants become maha-prasada. This maha-prasada will be distributed to everyone without consideration. I will keep you next to Me. You will have your tem¬ple just behind Mine in the mner courtyard. Lord Shiva, because he neglected to give you maha-prasada, will stay at a distance. He will have his temple outside the courtyard.”