One day Lord Shiva was relaxing in Mount Kailash with his wife Goddess Parvati and sons, Lord Ganesh and Lord Kartikeya. Suddenly the sage Narada Muni appeared before Lord Shiva and prayed his obeisance to him. Now the sage Narada was known to cause mischief wherever he goes and it looked like this was also going to be one of these times. Narada had a golden mango in his hands which he gave to Lord Shiva. 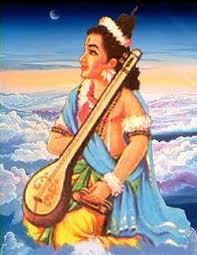 Shiva was surprised and asked Narada, “Why have you come so far to Mount Kailash just to give me this mango?”. “This is no ordinary mango” Narada replied, “This is the golden mango of knowledge and whoever eats this mango will be granted eternal knowledge and wisdom. However, there is a condition to eating this fruit” he warned. Lord Shiva, who was in the process of cutting the fruit into four pieces stopped and muttered, “I should have known. If Narada gives something to someone, it has to come with some conditions and I am sure, there is some mischief also afoot”. “Tell me Narada, what is the condition to eating this fruit” Lord Shiva asked Narada. With a smirk on his face, Narada replied, “This fruit has to be eaten by only one person”

While Narada was explaining to Shiva about the fruit, Parvati, Ganesh and Kartikeya appeared there. When the boys saw the golden mango, each wanted to eat it. Both the boys wanted to prove that they were superior and hence should eat the fruit. Shiva was frustrated as he did not want to be partial to one son over the other and neither did Parvati. So they decided to repay Narada with a tactic of their own. “Boys, Sage Narada will decide who gets the mango” Shiva intoned, passing the buck to the person responsible for all this in the first place. Narada was caught in the trap of his own making and so tried to get out of this by saying, “Boys, the person who covers the world three times first will get this fruit”. 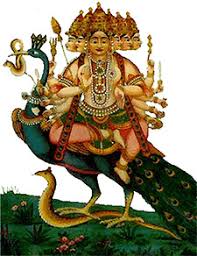 Even before Narada finished saying these words, Kartikeya jumped into his vehicle, a peacock and was soon out of sight. Ganesh remained where he was with a thoughtful expression on his face. “Ganesh, child, aren’t you going to go around the world?” a worried Parvati asked her son. “Wait, Mother, let me think” replied Ganesh.

At this point, Kartikeya zoomed past them shouting, “I’ve finished one round, Ganesh get yourself off the ground and atleast start, I don’t want to win just like that!” Kartikeya was 100% sure he would win. His vehicle was the peacock as against that of the lowly mouse that Ganesh had and he had already completed one round while Ganesh was still sitting in Mount Kailash.

By this time Ganesh had decided what he would do to win this competition. Just as he started to get up and move, Kartikeya zoomed past shouting that this was his second round complete and he just had one more round to win.

Ganesh slowly made his way to his parents and bowed low before them. He then started circling his parents three times. Shiva and Parvati were perplexed and asked Ganesh, “Child, you were supposed to circle the world, so why are you circling us instead?”. The answer they got surprised and impressed them for Ganesh replied, “You, my parents are my universe and my whole world. So if I circle you, it means that I have circled the entire world”. Saying this, he finished his third circle just as Kartikeya reached Mount Kailash after finishing his third trip across the world.

“I won, I won”, yelled Kartikeya. “Ganesh, you are still here, while I have circled the world three times”.

“But how, he was still  here when I finished all three rounds”, asked Kartikeya with a pout.

Lord Shiva explained what Ganesh did and handed over the fruit to him. Kartikeya was upset that his brother had pulled a fast one over him, but he could do nothing as what Ganesh did was absolutely right and had proved to be much more intelligent than him.