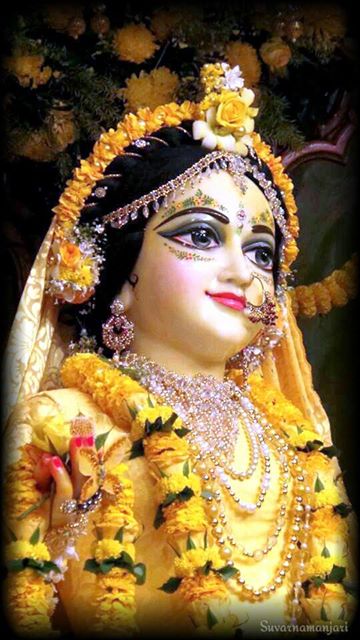 When Krsna first appeared in Gokula, Narada came for His darsana and thought, “Krsna never appears alone; His hladini-sakti must also have been born.”

In the meantime, Vrsabhanu Maharaja was staying in Raval, where he daily took bath in the river Yamuna. One day, fifteen days after the birth of Lord Krsna, just after taking his bath, Vrsabhanu Maharaja saw a thousand-petaled lotus flower in the Jamuna. In the middle of that lotus flower was a beautiful baby girl sucking Her thumb and moving Her hands and legs. Seeing Her, he immediately picked Her up, took Her in his arms, brought Her to his wife Kirtika, and placed Her on Kirtika’s lap. Not many people know Radhika as the daughter of Kirtika-devi; they mostly know Her as the dear daughter of Vrsabhanu Maharaja.

Just after the appearance of that baby girl, Narada went to Vrsabhanu Maharaja’s home and inquired from him, “Has there been any child born of you?”

Narada then blessed Sridama and asked, “Has there been any child born more recently?”

Vrsabhanu Maharaja replied, “Yes, a few days ago a daughter was born; I was blessed with a daughter.”

Narada asked Vrsabhanu Maharaja, “May I see your daughter? I want to do Her chart and bless Her. I will describe Her future qualities. Please gather candana, Yamuna water, and other paraphernalia so that I can perform a ceremony to bless Her.”

Vrsabhanu Maharaja then went inside the house and Narada entered a trance of meditation. While he was meditating, that baby girl manifested an exquisite youthful form. Lalita and Visakha were also present, and Lalita told him, “Why are you continuing to meditate; stand up and offer your obeisances.”

Narada then received a one-moment darsana of Radhika, but because his thirst to see Her was not quenched, he went to Narada-kunda and performed austerities for thousands of years, without eating, and continually chanting Radha mantra-japa. At that time Radharani appeared to Him, gave him Her service, and he became Naradiya gopi. We know these details from sastra.

Srimad-Bhagavatam states, “Ete camsa-kalah pumsah krsnas tu bhagavan svayam – Krsna is the original Supreme Personality of Godhead.” Although Sri Krsna is the supreme worshipful Lord of all, He Himself worships Sri Radha. The aim of the author, Srila Vyasadeva, in manifesting Srimad-Bhagavatam was to describe Sri Krsna’s pastimes with Srimati Radhika and to establish Her glories. Srila Sanatana Gosvami and Srila Visvanatha Cakravarti Thakura say that rasa-lila, the most exalted pastime in Srimad-Bhagavatam, was performed for the sake of Srimati Radhika. Krsna personally told Her, “It is for You that I reside in Vraja.”