Once Narada muni was walking somewhere and there was a beggar sitting on the roadside.

The beggar saw Narada Muni and he went running towards him and pleaded, “O Saint ! I am not getting any charity today. Can you please fill up my begging bowl ? ”

The beggar did not know that Narada himself was penniless.

Narada replied, “I don’t  have anything. But, I will give a recommendation letter to Kuber.  He is the treasurer of Heaven and so he would definitely help you”.

So Narada wrote a letter to Kuber,

I am sending a beggar with his begging bowl . Please see to it that the bowl is filled.

The beggar was very pleased and he went to Kuber and showed this letter.

Kuber was happy to see letter from Narada and he immediately ordered his servants to do the needful and give a lot of wealth to this poor men.

After sometime his servants came running to Kuber and told him that even after emptying the whole treasure house,  the bowl could not be filled.

They were perplexed and were wondering what was wrong.

Meanwhile Narada Muni came that way and when he heard the situation, he asked the beggar to show him the bowl.

He asked him to turn it upside down to see whether there is any hole at the bottom and when the beggar did that, they found that it was not a begging bowl but a Human Skull!

Now that was explained to him why it was not getting filled even after emptying the whole treasure. 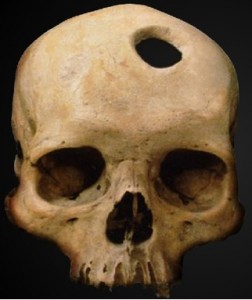 So please remember as long as our senses are materially contaminated, the human mind always hankers and cannot be satisfied even if Kuber’s treasure is awarded to it.

Due to this unsatisfied mind, we always suffer. So please take shelter of the Holy Names and Shastras and always be satisfied with whatever Krishna has blessed you with and continue sincerely in your devotional service.

There is a famous saying that goes as follows: There is enough in this world for every man’s need; But not for even one man’s greed. So may we remember this and always be attached to Krishnas Lotus feet.

“One who is thus transcendentally situated, at once realizes the Supreme Brahman. He never laments nor desires to have anything; he is equally disposed to every living entity. In that state he attains pure devotional service unto Me.”

“As as soon as we become brahma-bhuta, living entity who is in search of Sri Krishna – the first reward which the Lord bestows is transcendental bliss and so we become “prasannatma” -fully joyful. So, in that stage devotee never laments or desires.