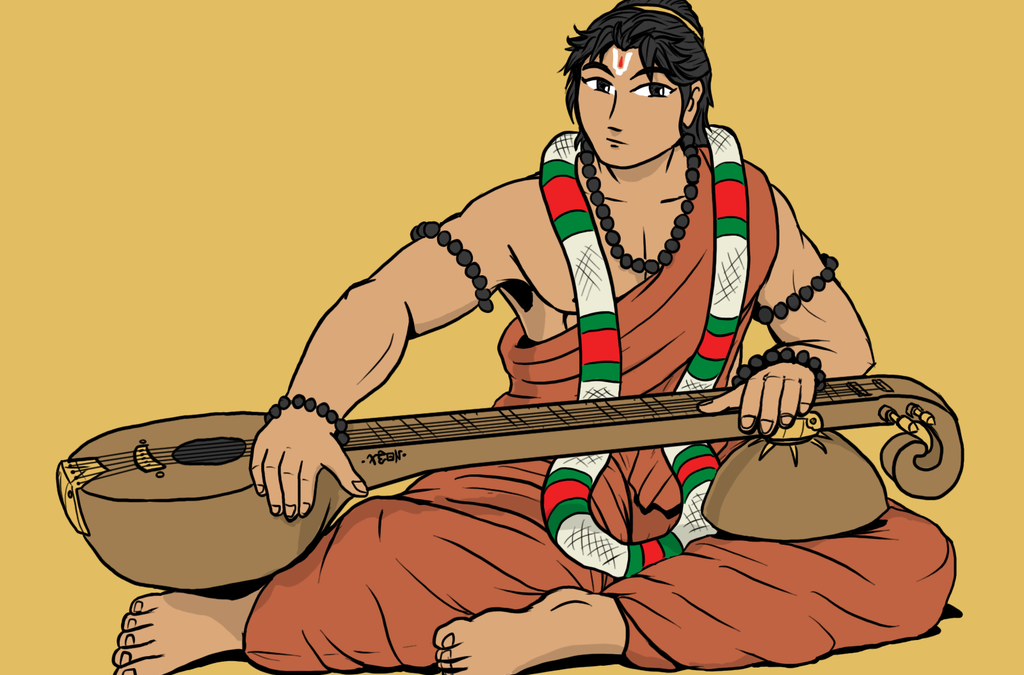 Sri Radha said: That tiger of sages Ribhu was a great devotee, filled with love for You. He was very fortunate. He attained a transcendental form like Yours. Your face was wet with tears of love for him.

O deliverer from evils, that sage must have performed great austerities to have attained a transcendental form like Yours.

Sri Narada said: As Radha was speaking these words, the sage Ribhu’s body became transformed into a river that killed all sins as it flowed on Mount Rohita.

Sri Radha said: Why did this great sage Ribhu’s body become a stream? O Lord, only You can cut apart the bewilderment I feel about this.

The Supreme Personality of Godhead said: That king of sages was filled with love and devotion for Me. O girl whose thighs are like banana trees, that is why his body became liquefied.

Sri Radha said: O master of the demigods, O ocean of mercy, how did Your body become a liquid? This fills Me with wonder. Please tell Me this story in great detail.

The Supreme Personality of Godhead said: The sages tell the ancient story of this pastime. When one hears it his sins become destroyed.

In ancient times Lord Brahmä, the progenitor of the living entities, was born from My lotus navel. He performed austerities, and with My blessings he created the material universe.

From the creator Brahma was born a saintly son named Narada who, mad with love for Me, wandered the worlds singing songs about Me.

One day Lord Brahma, the pregenitor of the living entities, said to Narada, O very intelligent one, please father many children. Give up this useless wandering.”

Hearing these words, Narada said, Father, I am eager for transcendental knowledge. I will not create children. Creating children is the cause of bewilderment and grief.”

I will create devotion for Lord Krsna and songs about His glories. You should give up the creation of children, which brings only sufferings.

His lips trembling with anger, Brahma cursed him, Fool, you like to sing. Become a gandharva for a kalpa.”

O Radha, because of this curse Narada became the gandharva Upabarhana. For one kalpa he was the leader of the gandharvas in the world of the demigods.

One day, accompanied by many women, he came to Brahma’s planet. His mind thinking of the beautiful women, he sang without a proper tala rhythm.

Again Brahma’ cursed him, Fool, become a sudra!” By Brahma’s curse he then became a maidservant’s son.

O Radha, In ancient times, by the association of saintly devotees, again Narada was born as Brahma’s son, and again, mad with love for Me, he wandered the worlds singing songs about Me.

Narada became the king of sages and the best of devotees. A blazing sun of transcendental knowledge and a pure devotee very dear to Me, Narada always meditated on Me.

One day, as he was traveling where he wished, seeing many different worlds, and singing many songs, Narada came to the place named Ilavrta-varsa.

O beloved, in that place is a dark jambu-juice river that becomes the golden river named Jambunada.

In that place the yogi Narada saw the city Veda-nagara, which was filled with jewel palaces and divine men and women.

There he saw the men and women were all deformed. Some had no feet, some no ankles, some no knees, some no legs, some twisted hips, some emaciated thighs, some disfigured torsos, some loosened teeth, some hunched shoulders, some bowed heads, and some no necks.

Seeing them all, the sage Narada said: What is this wonder? You all have lotus faces, splendid forms, and beautiful garments.

Are you devas? Are You upadevas? Are you great risis? You sing and play on your instruments very beautifully.

Why are you deformed? Please tell me.” Addressed in this way, all the people, unhappy at heart, replied.

The ragas said: O sage, our bodies have suffered terribly. We will tell you how these sufferings may be thrown far away.

O sage, we are ragas and we live in the city of Veda-nagara. O gentle and humble one, please hear how we became deformed in this way.

Lord Brahma has a son named Narada who, mad with love, sings the wrong melodies at the wrong times.

He is a great sage that wanders the worlds as he wishes. But his singing the wrong songs at the wrong times, with the wrong notes and without a proper rhythm, has broken the limbs of our bodies.

Hearing these words, Narada became astonished. Humbled, and trying to smile, he spoke.

Sri Narada said: How can one obtain knowledge of the proper times and proper rhythms of music? Please tell me.

The ragas said: Goddess Sarasvati is the dearest beloved of the Supreme Personality of Godhead, the master of Vaikunthaloka. One who learns from her will know the proper times of music.

After hearing their words, Narada, who is very kind to the distressed, went to Mount Subhra to obtrain the mercy of Goddess Sarasvati.

O queen of Vraja, for one hundred celestial years Narada performed austeries. Fasting from food and water, he meditated on Goddess Sarasvati.

Purified by Narada’s austerities, that mountain ceased to be called Mount Subhra. Now it is called Mount Narada.

When his austerities had come to their end, the sage Narada personally saw splendid Sarasvati, the goddess of speech and the beloved of Lord Visnu.

At once standing up, bowing down, and circumambulating Her with bowed head, Narada, the king of sages, spoke many prayers gloirifying her beauty, virtues, and sweetness.

Sri Narada said: I offer my respectful obeisances to Goddess Sarasvati, whose face is more beautiful than millions of moons, whose glistening anklets tinkle melodiously, and whose glistening crown, earrings, bracelets, and armlets eclipse the glory of the bimba fruit and the rising sun.

Again and again I offer my respectful obeisances to beautiful Goddess Sarasvati, who wears a necklace of pearls splendid as a host of flying swans with restless feet and beaks.

I offer my respectful obeisances to you, beautiful Goddess Sarasvati, who hold in your pure and splendid hands a vina and a book, who grant the blessing of fearlessness, and who have come to this material world in your spiritual form.

O goddess dressed in white silk tossed by graceful waves as you walk, O auspicious one, please give me knowledge of music. Make me the best of musicians. Make me unrivaled among musicians.

The Supreme Personality of Godhead said: A person who rises at sunrise and recites this splendid prayer Narada spoke to Goddess Sarasvati, a prayer that removes the numbness of ignorance, becomes a great scholar in this world.

Pleased, Goddess Sarasvati gave to the great saint Narada the vina’ named Devadatta, which was decorated with spiritual sound.

In this way Sarasvati, the goddess of speech and the beloved of Lord Visnu, made Narada unrivalled in the circle of musicians. Then she returned to the spiritual world of Vaikuntha.