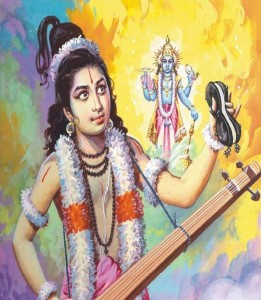 Once when Narada was staying with Krishna in Dwaraka, they decided to go on an aerial trip in a chariot.

The sage felt thirsty after sometime and wanted to quench his thirst when they came across a river.

Krishna told him to do so after bathing but Narada did not pay heed to his advice.

He drank the water without bathing and got transformed into a beautiful woman.

Krishna and the chariot disappeared from his view.

Narada, who wandered into the forest, saw a rishi in penance and stood before him with folded hands.

The rishi opened his eyes and accepted Narada as his disciple.

After some time, Narada, who was in the form of a woman, married the rishi and had 60 children.

One day, the rishi and the 60 children died, leaving Narada grieving alone.

She wanted to perform the funeral rites but was unable to do so.

Suddenly, she felt very hungry and tried to reach for the nearest tree for ripe mangoes.

She could not reach them and so she laid the dead bodies in a heap and climbed on them to pluck the fruits.

A Brahmin appeared from nowhere and told her that as she was in bereavement, it was not proper to eat without having a bath. She accepted the advice and went to the nearby river.

She held the mango aloft in one hand and dipped the rest of her body in the water.

The woman transformed into Narada again except that the hand, which had not touched the water, remained the hand of a woman with bangles.

The Brahmin, who was really Krishna, told him to take a bath again, and this time Narada immersed himself fully in the water. He regained his normal form and the mango in his hand had turned into a beautiful Veena.