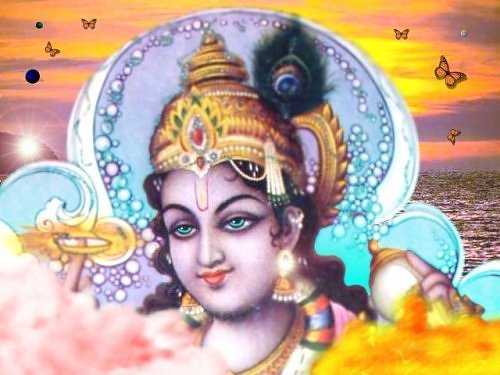 He lived in a small thatched house, in which one could only enter by crawling.

No one knew how long he had lived there.

He was a tall person and his whole body was covered with long hair, except for an area two inches wide on one knee, where there was no hair.

Narada, the celestial sage, had the pride of being the best devotee of Krishna because he was always chanting and singing the Lord’s name.

To humble his pride, Lord Krishna said to Narada one day, “Let us go and visit Lomasha Muni.”

When they arrived, Narada was surprised at the size of the hut, and was quite distraught when he saw that Lord Krishna had to crawl into it.

During this visit Lomasha Muni was not feeling well, and had a high temperature.

Knowing of their impending visit by his yogic powers, he ordered the fever to leave his body and enter into a rug, which he kept on a stick.

He said the fever could get back into his body once he finished talking to Lord Krishna. So he kept it in the rug, and the rug was shivering due to the fever.

As his guests entered, Lomasha bowed to Lord Krishna and then to Narada.

Narada, who was upset, asked why he lived in such a small place.

Lomasha answered, “Who knows how long I will live? What is the use of having a big house and wasting time in caring for it?”

Narada complained that it was even difficult for Lord Krishna to enter such a small place.

Lomasha smiled at this and said, “No, I do not think that Lord Krishna had any trouble because he is omnipresent. Where is He not? He is everywhere, so where does He enter or exit? He is present even in this rug here.”

Narada was still not happy and wondered what type of monk he was. He then asked him why the rug was moving and shivering.

Lomasha answered, “Since Lord Krishna and you, a great devotee of the Lord, were coming to see me, I asked my fever to leave my body and stay in the rug for the time being.”

Narada was surprised at the power of Lomasha.

Then he asked why there was no hair on just two inches of his knee.

Lomasha replied: “In every one hundred years, one hair on this part of my body drops. When all the hair on my body is lost, I will leave this body. God has given us time only to watch His presence in every moment. Time is God, so I am watching Lord Krishna all the time, since he is Time, and is everything to me. Time is God. So I only follow Lord Krishna. Lord Krishna has come, so I am giving my love to him.”

Then he gave some fruits to Lord Krishna, and they left. Narada realized the great devotion and surrender of Lomasha Muni, and his pride was humbled.

Sai Ram. Though in the above two stories, sage Narada is shown in rather poor light, in reality, he is such a great devotee of Lord Vishnu that he shows how the Lord helps His devotees overcome the Maya / illusion. It may be mentioned that all actions of sage Narada and other devotees of Lord are meant for the welfare of the whole world.