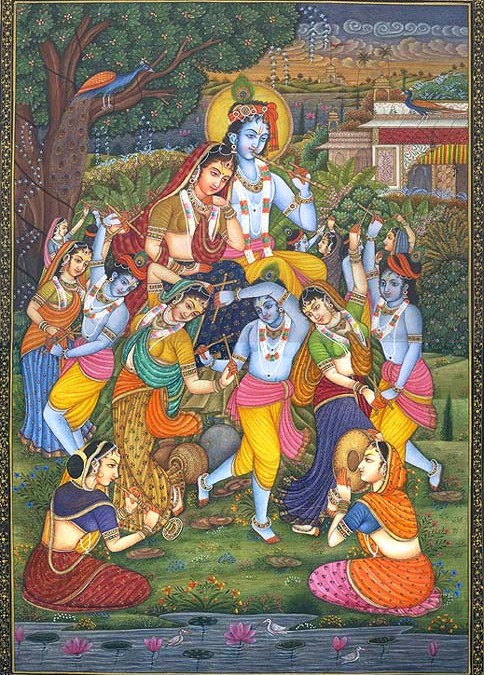 Located about 400 meters to the south east of Kusuma Sarovar there is a Kund called Narada Kund dedicated to Narada Muni. According to the Vedas, when Narada Muni heard about the glories of Rasa Dance and Gopi Bhava (nature) from Vrinda Devi he felt a strong desire to serve Lord Krishna and Radharani in the form of a Gopi. So, after getting the Gopal Mantra from Lord Brahma he started his meditation.

After meditating for years he was blessed by Yogmaya Purnamasi Devi and with her blessings he took a dip in Kusuma Sarovar and attained the body of a Gopi. Thus, he qualified to perform the service of Lord Krishna. On seeing Narad ji in the form of Gopi, Sri Krishna advised him to stay at Narada-vana (an Upvana of Vrindavan) in Vrindavan and write the bhakti Shastra and told him that the curse of Daksh (according to which Narada could not stay at a single place) would not apply in Vrindavan as it’s not the part of materialistic world.
As advised by Lord Krishna, Narada Muni decided to stay at the place here at Narada Kund meditating. He wrote his thesis on devotional service to god in the form of Narada Bhakti Sutra here at Narada Kund. Near to Kund there is a small temple dedicated to Narada Muni (Sage).===============================

ACCORDING TO the Narada Purana (2.80.9-32), the Skanda Purana (2.6.2-3), and the Padma Purana (4.75.25-46), when Narada first heard that Lord Krsna had appeared in Vrndavana, he wandered Vrndavana’s twelve forests looking for any signs of his beloved Lord. With great intensity he ran through the secret bowers in which Krsna would meet with the gopis, His cowherd girlfriends. But he could not find any evidence of Krsna’s appearance.

Vrnda Devi, a prominent gopi who helps arrange Krsna’s rendezvous with His girlfriends, appeared before Narada and told him that to see such esoteric pastimes he would have to adopt the mood and form of a loving gopi himself. This was possible, she said, only for the most advanced practitioners of spiritual life. Vrnda Devi told Narada that he was one such soul and could affect such a change by bathing in a nearby pond known as Kusum Sarovara.

Narada did as Vrnda Devi had instructed and emerged from the waters as a gopi named Naradi. He was thus able to see Vrndavana with new eyes and enter into Krsna’s pastimes with the cowherd girls.
Later, Vrnda Devi instructed him to bathe in another pond, which came to be known as Narada-kunda, and he resumed his male form.

The Narada Purana says that the lesson to be learned from this episode is that even a sage as great as Narada must meditate on Vrndavana in the intense mood of a gopi to attain the highest level of prema, love for Krsna. Such meditation is possible for only the most accomplished devotees.

Narada Vana is near Kusuma Sarovara. Narada Muni is said to have wrote the Narada-bhakti sutrashere. He performed tapasya here after being instructed by Lord Siva to do so. He desired to witness the conjugal pastimes of Radha Krishna at Radha Kunda, but could not do so because he was in a male body. The story of Narada at this place is told in the Bhakta Ratnakar.

After being blessed by Vrinda Devi, he took a female body after bathing in Kusuma Sarovara. He then witnessed the pastimes of Radha and Krishna at Radha Kunda.

After Narada Muni heard the glories of supreme gopi-bhava from the mouth of Vrindadevi, a strong desire to serve Radha and Krisna in the form of gopi arose in his heart. It is an accepted Doctrine that the questing human soul is feminine, the only male is Lord Krishna and the rest are all gopis. Naradji considered Lord Krishna’s heart, could only witness his Raas or raputuruous dallance after being born as a cowherdess.

He received a gopala-mantra from Brahma and begin his sadhana-bhajana for the gopi bhava (love flowing towards the Lord); overwhelmed with a desire to witness the madhurya or sweet love of Lord Krishna with the Brajbalas.After performing worship for many yugas Yogamaya Paurnamasi dipped Naradaji in Kusuma-sarovara (Shri Kusumadevi Gopi Pond Form) and he received a body of the gopi.Thereafter he obtained the qualification to perform seva of the Divine Couple with the help of Shri Van Devi to enter the world of Lord Krishna’s dalliance and he was ecstatic.

Seeing Narada there in the form of a gopi, Sri Krishna requested him to stay at Narada-vana and write bhakti-sastras.lthough Narada had been cursed by Daksa not to be able to stay in one place, Krisna informed Narada that because Vrindavan-dhama is not a part of the material world, the curse of Daksa would not apply here.

After another bath in Kusuma-sarovara, he changed back to he male form and returned to this place, where he wrote the famous treatise on devotional service known as the Narada-bhakti-sutra. About four hundred meters little off the road south-east of Kusuma-sarovara is Narada-kund.There is a small temple of Narada Muni with friendly pujaris. Narada instructed Prahlada Maharaja here in the womb of his mother, since it is said that he took her to his ashram and instructed little Prahlada in her womb for some time. In any other place it would not be possible for Narada to stay for some time and it is concluded that he must have done it here, in Vraja, where Daksa’s curse had no effect.