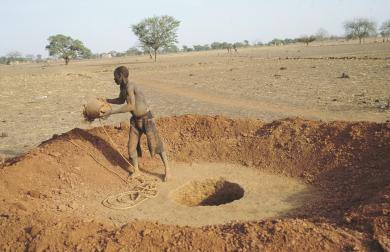 Once in a village in India, there lived a young man named Ramlal. He once set out to dig a well enthusiastically.

He selected a good spot and cheerfully set to work, humming a tune.

After digging 15 cubits, there was no sign of water.

Ramlal decided to rest for a while and then continue.

Just then, another man came along. He asked Ramlal what he had been doing.

Ramlal replied that even after digging 15 cubits, there was no water.

The stranger told Ramlal that he knew of a place where one would strike water within minutes.

The stranger took Ramlal to the spot and Ramlal started digging right away.

After digging fifteen cubits, there was still no sign of water.

Soon, yet another man came along and took Ramlal to a spot where he said water would gush out in torrents.

And Ramlal began to dig. After several hours, having dug thirty cubits down, the only water that was gushing out in torrents was his sweat.

Though water was scarce, advisers were not. On the advice of another passerby, Ramlal sunk twenty more cubits at another spot.

But still, there was not even a trickle of water. Ramlal was frustrated.

Just then, Pyarelal, Ramlals friend came by and heard the whole story.

Ramlal told his friend that he had sunk 85 cubits altogether.

Pyarelal said, If you had sunk those 85 cubits in one place, you would have struck water anywhere in the village, even under a rocky surface.

This story reminds us of the following verse from Srimad Bhagavad Gita 2.41:

“Those who are on this path are resolute in purpose, and their aim is one. O beloved child of the Kurus, the intelligence of those who are irresolute is many-branched.”

In the story, we can see that Ramlal was not resolute in his purpose.

His intelligence was many branched and irresolute.

He heeded the advice of several other passers by.

But, if he had been resolute and determined and had he stuck to digging in one place, he would have surely succeeded.

In the same way, in order to obtain the divine nectar of Krsna Prema, we have to be resolute.

We should not get carried away by the advice of false gurus and materialistic persons.

We should firmly be fixed in devotional service and execute it with full sincerity and strong faith that by Krsna Consciousness one will be elevated to the highest perfection of life (Krsna Prema).