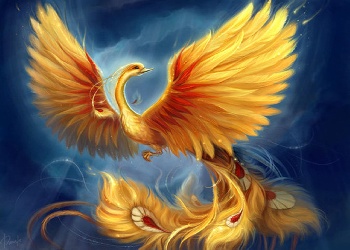 Once there was a Brahmana who had a wife and three daughters.

He took good care of them.

Suddenly one day the brahmana died.

His wife and his children were lamenting over his death.

Meanwhile, the Brahmana was reborn as a golden swan. Because of

his good fortune he could remember his previous life. So he wanted to go and see how his family was getting along.

The swan flew to the village where his previous life’s family were living.

Then he saw that his family was in a very poor condition and were begging for a living. Because of his foolish attachment he wanted to help his previous life’s family.

He flew upto them and told them that he was her husband reborn as a swan. So he told them that every week he would give one of his golden feathers by selling which they can maintain themselves.

Thereafter every week the swan would deliver a golden feather to his previous life’s family and they became rich in due course.

But because of the avaracious greed,she decided to pluck all the feathers of the golden swan doubting that the swan being a mere bird may cheat them.

So the next time the swan came, she caught the swan’s neck and plucked all the golden feathers of the swan forcibly.

feathers. The swan shouted at her and said that if the feathers are plucked forcibly then it would not be golden.

On saying so the swan’s wife with frustration threw away the golden swan in the dust bin. Alas the swan lamenting for his foolishness in trying to help his family and died a slow death.

“O my Lord, people of the world are embarassed by all material anxieties – they are always afraid. They always try to protect wealth, body and friends, they are filled with lamentation and unlawful desires and paraphernalia, and they avaraciously base their undertakings on the perishable conceptions of ” my” and ” mine”. As long as they do not take shelter of Your lotus feet, they are full of such anxieties”.