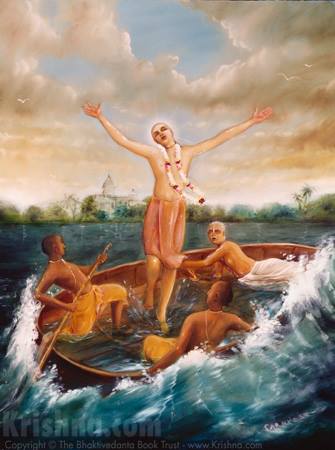 Gangadevi was thinking that Yamuna Mai is doing such wonderful service.

Yashoda Mai is bathing Krsna in the Yamuna. Nanda Maharaj is taking bath in the Yamuna and Krsna and all His friends are having the most intimate loving lilas.

And the gopis, Krsna standing on the bank of Yamuna playing His flute and Yamuna is stopping her waters and bringing Him lotus flowers.

Ganga was not envious, Ganga was not jealous. Ganga was just so much happy to see the good fortune of Yamuna but was longing that she could do that service.

So Ganga did tapasya and Krsna gave her the blessing – in Kaliyuga, Radha and Krsna will appear as Gauranga Mahaprabhu – and perform the same Braja lila in Navadvipa and you will be there to assist in every way.

And she assisted – in every way!

When Gauranga Mahaprabhu decided to appear, He chose to do it during an eclipse where everyone was in the Ganga and in those days for the whole duration of the eclipse, everyone stood in the Ganga and loudly chanted the Holy Name –

And Nimai when He was a little boy His mother would make all nice arrangements for Him to bathe in Ganga.

When He was a student, practically for a major portion of the day Nimai and His students would just play in the Ganga – they splash everyone and spit water in the faces of brahamanas who were trying to do their gayatris – so many pastimes, playing in the Ganga almost all day Nimai and His friends – its like Krsna and the gopas.

In fact they were Krsna and the gopas.

What was Nimai’s love and faith in Ganga, 3 times a day He would bow down to her, worship her, honor her!

He is teaching us what devotion is.

And when scholar Kesava Kasmiri came to Navadvip, Nimai said, “O, you are the greatest of all pandits, Goddess Sarasvati appears on your tongue every time you speak. Please compose verses in glorification of Mother Ganga” and Kesava Kasmiri like the raging wind composed instantly a hundred verses glorifying Gangadevi.

And it was there on the bank of the Ganga that Nimai liberated his soul, how?

By taking away his ego so that he could be humble and grateful and then receive the mercy.

According to Vrindavana Das Thakur, Mother Ganga was so eager to continue assisting Lord Caitanya, He was bathing in her at least 3 times very day and sometimes he’d be there most of the day and she was just doing seva, offering her life for the pleasure of the Lord and His devotees but He is living in Puri.

So Ganga was flowing very fast from Navadvipa to merge into the sea.

At Ganga Sagar, she merges into the sea and then she rushed, her waters rushed to Puri because Lord Caitanya was bathing in the sea 3 times a day and she was there assisting samudra in facilitating the happiness of Lord Caitanya and His devotees.

When Sri Caitanya Mahaprabhu decided to go to Bengal, what did He say?

As wood, I am Lord Jagannath and as water, I am Mother Ganga who have come to deliver the fallen souls of their sins and give love for Krsna”.

And when Sri Caitanya Mahaprabhu was walking, he said at a point, “I’m going to Bengal for 2 reasons – to see my mother, Saci and my mother, Ganga”.

And as He was on His way and He came close to the Ganga, He started glorifying “Anyone who bathes in Ganga, touches the Ganga, drinks Ganga, sees Ganga or anyone who is touched by a breeze that has come from the Ganga will get Krsna Prema – love for Krsna”.

The breeze of Ganga can awaken love of god within us if we have the receptivity to digest that blessing.

If you are really hungry then you can really appreciate food and assimilate it and digest it. So similarly that humility, that gratitude, that service attitude gives us a hunger for Krsna Prema, a hunger for service, a hunger to chant God’s names and then when we chant Krsna’s names, when we take bath in the Ganga, when we associate with Holy people, we get proportionate effects.

Narottam Das Thakur in one song he explains that by bathing hundreds of times in the Ganga, one could be purified of sins and eventually love of God could awaken but just by seeing a pure Vaisnava the same effect is achieved because devotees of the Lord they are holy places personified.

Those who go to the holy place just to bathe in the river without associating and seeking out saintly people are people of Kali yuga.

Ganga is all merciful but without the blessings of saintly people and learning from them, we cannot access that blessing.

And the most powerful current of grace in this age of Kali is Krsna’s Holy Names.

This Kali is an ocean of faults but there is a benediction – if we are just grateful to receive the instruction – simply chanting the Holy Names of the Lord the result of following every other possible devotional activity,