Mahabrarata story: I see only the round black eye of the bird! 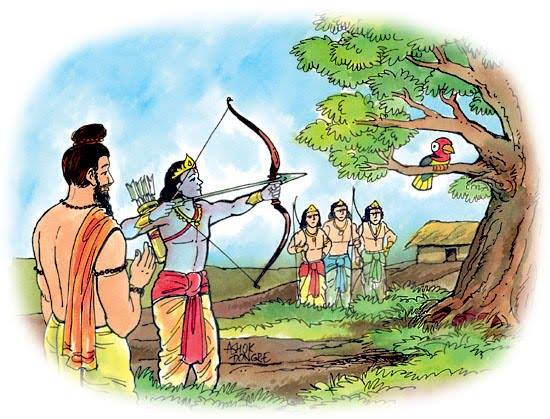 When Dronacarya was teaching archery to his students, he once asked them to shoot a bird on the tree by aiming its eye.

He called them one by one and showing the bird, he asked them what they saw.

Everyone except Arjuna, said that they saw the tree, the branches, the bird etc and so everyone missed the target.

“Those who are on this path are resolute in purpose, and their aim is one. O beloved child of the Kurus, the intelligence of those who are irresolute is many-branched.”

Arjuna had been practising archery day and night and was the best archer among the students of Dronacarya.

So when Arjuna’s turn came Drona inquired him as follows.

Saying so Arjuna released the arrow and it just hit the target straight.

In verse 11.9.13, the avadhuta brahmana says how an arrow-maker was focused in mind and was completely absorbed in his target of making the arrow sharp and straight, so much so he didn’t even realize the king himself passing by him in a royal procession.

The biggest problem we face is controlling the mind from wandering about.

For success in any job, focus and one-pointed unwavering attention of the mind on the job is a must.

In the verses SB 11.9.11 and 12, the avadhuta brahmana talks about how to control the mind and in verse 13 he gives the example of the arrow-maker to explain the importance of an attentive mind.

“Thus, when one’s consciousness is completely fixed on the Absolute Truth, the Supreme Personality of Godhead, one no longer sees duality, or internal and external reality. The example is given of the arrow maker who was so absorbed in making a straight arrow that he did not even see or notice the king himself, who was passing right next to him.”

In the purport the situation of this particular example of arrow-maker is beautifully brought out to reveal to us how much the arrow-maker was focused on his job.

“It is understood that when a king moves on a public street he is heralded by kettledrums and other musical instruments and is accompanied by soldiers and other members of his retinue.

Thus, despite this royal extravaganza passing right by his workshop, the arrow maker did not even notice because he was completely absorbed in his prescribed duty of making an arrow straight and sharp.

One who is completely absorbed in loving devotional service to the Absolute Truth, Sri Krishna, no longer pays attention to material illusion.

In this verse the word bahis, “external” refers to the innumerable objects of material sense gratification, such as food, drink, sex, and so on, which drag the senses of the conditioned soul into material duality.

The word antaram, or “internal” refers to memory of previous sense gratification or hopes and dreams for future materialistic situations.”