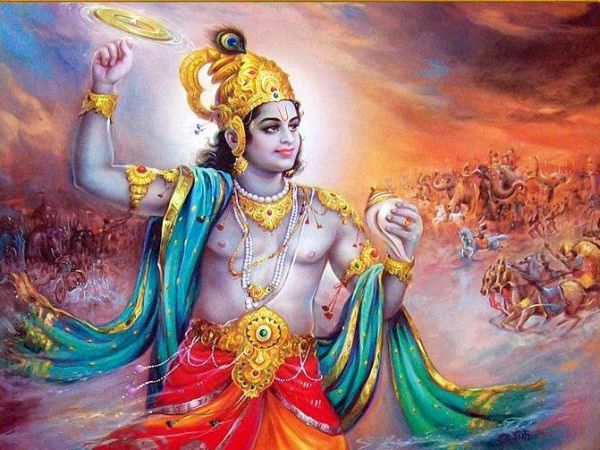 Dronacharya had a son named Ashwatthwama.

He was named Ashwatthwama because as soon as he was born he started neighing like a horse, and “Ashwa” means horse.

Dronacharya was extremely fond of his son. Ashwatthwama learned archery from his father and became a great hero.

Ashwatthwama’s mother was the sister of another great archer, Kripacharya. Kripacharya also helped Ashwatthwama, as well as the Kauravas and Pandavas, in archery.

It was also Kripacharya who had requested Dronacharya to teach the Pandavas and Kauravas after him. They were very close relatives.

Ashwatthwama learned many secret ways to use the bow and arrow and soon became an expert.

The Pandavas were in the forest because of Arjuna’s and Yudhishthira’s defeat in a game of dice with Duryodhana and the Kauravas.

Ashwatthwama knew that Krishna was very fond of the Pandavas, especially Arjuna. So he thought, “This is the time for me to go to Krishna and get something from him.”

He went to Krishna and said, “I am giving you my most powerful weapon, the Brahmashira. It can kill anyone when it is used against them. Will you not give me your Sudharshan Chakra disc in return? Will you not trade with me? I would be so grateful,”

Krishna said, “Wonderful! I am ready to exchange. Please take it.”

Ashwatthwama tried to lift the Chakra disc up, but it was impossible for him to lift it.

Krishna said, “Young man, you cannot even lift my weapon. How are you going to use it?”

Ashwatthwama was embarrassed and ashamed. Krishna smiled at him saying, “Be satisfied with what you have and fight against others with the help of your weapon. My weapon is too heavy for you.”