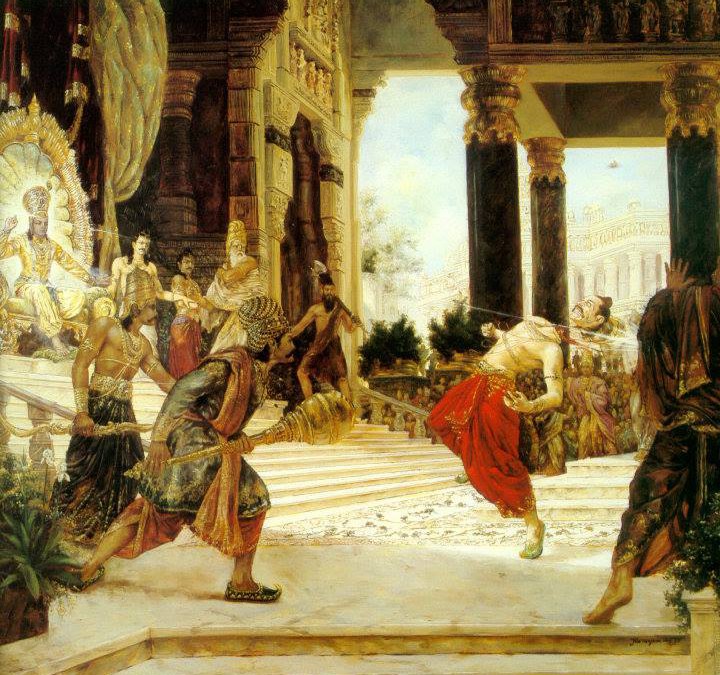 In Mahabharata Bhishmacharya addresses the Lord as ‘Damodara sahah’ which means Lord Damodara one who is very tolerant.

In Mahabharata, the Lord is called by many names such as Krishna and Vasudeva repeatedly, but the word Damodara is used only in 2 or 3 instances.

One such instance is related to the birth of Sishupala.

When Sishupala was born he had three eyes and 4 hands.

And as soon as he was born, he screamed and brayed like an ass.

His parents were scared and they wanted to abandon him.

However at that time there was a celestial voice which spoke, “Do not abandon this child. He will be very superior in strength and power and very fortunate person. You can’t slay him now. That person who will slay him is already born.”

Then his mother folded her hands and asked the corporeal voice, “Please tell me who will slay my son.”

This news spread across like wildfire and when kings of different provinces heard about this, they were astonished and they came to see the child.

When they came, Sishupala’s mother kept the child on their lap to see if the eyes and hands are disappearing.

Even after thousands of kings saw the child and put him on their lap, the change which the celestial voice said did not happen.

One day Lord Krishna and Balarama visited Sishupala’s palace to see the child.

Mahabharata verse (2.40.16) calls the Lord as Damodara as follows.

“And saluting everybody according to his rank and the king and queen also, and enquiring after every body’s welfare, both Rama and Keshava took their seats. And after those heroes had been worshiped, the queen with great pleasure herself placed the child on the lap of Damodara.”

Then Sishupala’s mother became anxious and asked, “Please forgive all the offences of my son Sishupala for my sake.”

The Lord replied, “O aunt, I will forgive all his offenses. Even when his time of slaying comes, I will pardon him up to 100 offenses and only if he goes beyond this I will slay him.

So it is interesting see that the Lord is called by the name Damodara here.

He is addressed by this name because He tolerated all the offenses of Sishupala till Sishupala’s time came in the Rajasuya sacrifice done by Maharaj Yudhishtira.

There Sishupala openly blasphemed the Lord in front of everyone and still He was undisturbed by it and tolerated it.

A kshatriya is never supposed to tolerate insults or blasphemy, but the Lord by His unlimited mercy promised to tolerate all the offenses of Sishupala and kept that promise.

When things do not go in our way in material or spiritual lives, our devotional service gets affected and sometimes we even blaspheme the Lord for this. (Many times I see that my blasphemy overtakes Sishupala).

He openly rebuked the Lord, but we do in a subtle way by challenging Him why He is doing things in a certain way.

Or we say that He does not know how to run this world and He can do it better etc.,

And sometimes my rebellious mind thinks that my life would have been much better if I had not taken to devotional service.

But the Lord tolerates all this and still allows me to continue in devotional service.

Thus this name Damodara reveals the Lord’s mercy especially in this month of Karthika, since by offering a lamp to Him in this month, one attains great spiritual benefits and advance in bhakti, irrespective of our situation.

So let us all pray for Lord Damodara’s grace to continue and advance in spiritual life in this auspicious month by the following verse of Damodarashtakam.

“O Supreme Godhead, I offer my obeisances unto You. O Damodara! O Ananta! O Vishnu! O master! O my Lord, be pleased upon me. By showering Your glance of mercy upon me, deliver this poor ignorant fool who is immersed in an ocean of worldly sorrows, and become visible to my eyes.”