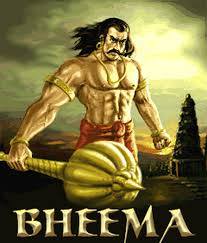 When Yudhistar Maharaj was ruling this planet, Bhima used to help in solving
problems of people, hence people who ever has any questions/problems would
come to Bhima and ask him for help. One day, one citizen came and asked
Bhima that he noticed a strange thing that day that his fence is moving into
other’s place and he is wondering why it happened like that. Bhima can help
if a demon is troubling but not these kind of puzzles so he asked him to
approach Yudhistar Maharaj.

On the same day, another citizen came and told that he came across with a
strange thing that he had a big pot with full of water, he poured that
water into small pots then he poured back from the small pots to
big pot but surprisingly only half is filling into that big
pot. Bhima not knowing what to say, he asked them to contact Yudhistar
Maharaj. Another person came to Bhima and said that he saw a strange thing
that a big elephant is passing through from a needle hole but surprisingly
it’s tail got stuck in that hole. Bhima again referred him to Yudhistar
Maharaj. Another person came and said that he saw big rock in the street and
big big personalities are not able to move but a sadhu came and by waving
his Sanyasa danda, it moved. Bhima thinking that it’s bad day for him and
all are coming with these strange questions which he cann’t help, so he
referred them to Yudhistar Maharaj.

They all went to Maharaj Yudhistara and asked about these questions, then
Yudhistar Maharaj said that, all these qualities shows that kali yuga is
coming and he explains ……

The first symptom is one of the citizen’s fence is moving into other’s area
shows that people are interested in what other’s have and feel unhappy why
they don’t have, then think a way to aquire them either hook or crook.

The second symptom is the big pot with full of water when it is poured into
small pots and pour back into big pot, he noticed only half only, which
means that one can expect 50% love/affection/help from others compared what
you did to the same person.

The third symptom is big elephant is going through a needle but the tail is
stuck, it means that people are ready to spend a huge chunk of their
income/strength/resource for the sense satisfaction of thier family, friends
and love(Personal sense gratification) but when it comes to Bhagavan and
Bhagavatha seva they are not ready to spend a little bit also.

The fourth symptom is, big rock not moved by persons who are having lot of
strength but a sadhu moved that rock just by waving his danda, which means
that one can get rid of all their unlimited sins, just by performing
Namasankirtanam.

Though there are so many faults in this kaliyuga, the good thing is, just by
chanting the holy names of the lord, one can get upto the highest benefit of
liberation as mentioned in SB 12.3.51 that

My dear King, although Kali-yuga is an ocean of faults, there is still one
good quality about this age: Simply by chanting the name of Lord Sri Krsna,
one can become free from material bondage and be promoted to the
transcendental kingdom of Vaikunta.

PS:I humbly request all the devotees to please forward moral / instructive stories they hear so that everyone
can be benefited