The king Shibi, a descendant of king Bharata of lunar dynasty, was famous for his truthfulness, justice, and keeping his word. The king of righteousness, Dharmaraj, himself decided to test the strength of character of Shibi Rana.

Once when the king was alone on the terrace of his palace, he saw one dove coming towards him with great speed. An eagle was after him, and to escape from the clutches of the chasing eagle the dove made frantic effort to hide some where. Seeing the king on the terrace, the frightened dove took shelter in his lap. The dove said, “O king, save my life, I have come under your shelter.”

The king had vowed to protect anyone who took his shelter. Thus the weak and deprived could not be exploited by the rich and strong. However, this was a new experience for Shibi Rana. Was he in any way obliged to protect a bird who seeks his refuge? Contemplating for a while, the king decided that even tress, animals, and birds require protection and help as do human beings.

Therefore, the king said, “Have no fear my son. That eagle would not be able to touch even your feather. Relax in peace, have no worries.” So saying the king readied himself to face the rapidly approaching eagle. The eagle landed in front of the king and said, “O king, you have hidden my prey. Please release him so that I can appease my hunger.”

The righteous king saw the point in eagle’s demand. He faced a peculiar dilemma of protecting the dove, and at the same time not to deprive the eagle of his rightful prey! He decided to resolve the issue by offering the eagle equal amount of meat from his kitchen. But the eagle insisted on having his prey -the dove – as his food. After some discussion the eagle agreed to set the dove free on two conditions.

The eagle said, “O King, I shall let the dove go, if equal weight of flesh from your body is offered to me as food.”

Shibi Rana was quite pleased with the adjustment. He thought that a pound (or two) of flesh from his body would not kill him and the life of the dove in his shelter would also be saved.

Thus he was happy that he was saved from a great sin of ‘inability to protect the weak’.

The eagle then put his second condition, saying, “O king, if a single tear drops from your eye I shall be constrained to accept you flesh as my food.”

The king agreed and called for the knives and the balance. In one pan of the balance the dove was kept and on the other side a large chunk of flesh from the right thigh of Shibi Rana. But strange as it might seem, the pan with the dove always weighed more even as additional flesh was added! Thus almost whole of the right half of the king’s body was cut. Still the weight could not be equaled.

At this juncture a drop of tear appeared in the left eye of the king. The eagle objected to this saying, “O king, I cannot accept the food given in distress. The tear in your eye shows that you are unhappy. So give me my prey back and you shall regain your normal health.”

This ultimate sacrifice of Shibi Rana was unparalleled in the history. The eagle and the dove disappeared and in their places stood the King of righteousness -Dharmaraj and the king of heavens –the Indra. Gods from the heavens showered flowers, perfumes, and praise on the king. They granted many boons to this noble king.

The king Shibi had passed the ultimate test to uphold Dharma, a true duty of every king. It is said that this king ruled for many years and after his death went directly to heaven to enjoy the fruits of his righteous karma.

MORAL: From this wonderful story we learn value of sacrifice our body for good of others. And also how we should not reffuce for anyone who need shelter and help.

PS: I humbly request all the devotees to please forward moral / instructive stories they hear so that everyone can be benefited. 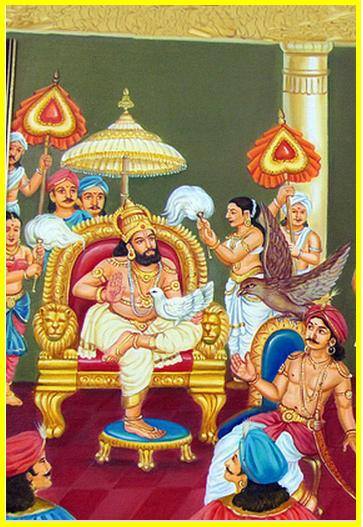