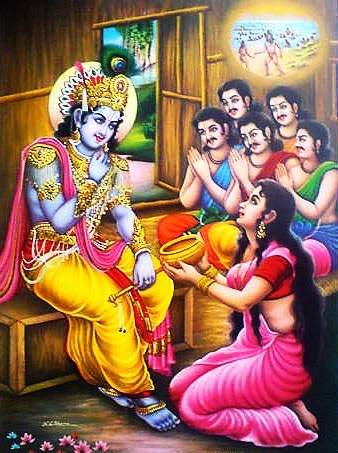 Once Durvasa Muni   visited the house of  Duryodhana, the enemy cousin of Maharaja Yudishtra.

Duryodhana was  intelligent enough to satisfy the brahmana by all means, and the  great rishi wanted to give some benediction to Duryodhana.

Duryodhana  knew his mystic powers, and he knew also that the mystic brahmana, if  dissatisfied, could cause some havoc,

and thus he designed to engage the brahmana to show his wrath upon his enemy cousins, the Pandavas.

When the rishi wanted to award some benediction to Duryodhana, the  latter wished that he should visit the house of Maharaja Yudishtra ,
who was the eldest and chief among all his cousins.

But by his request he would go to him after he had finished his meals with his Queen, Draupati.

Duryodhana knew that after Draupati’s dinner it would be impossible for Maharaja Yudishtra to receive such a large
number of brahmana guests, and thus the rishi would be annoyed and would create some trouble for his cousin Maharaja Yudishtra.

That was the plan of Duryodhana.

Durväsä Muni agreed to this proposal, and he approached the King in exile, according to the plan of Duryodhana,
after the King and Draupadi had finished their meals.

On his arrival at the door of Maharaja Yudishtra, he was at once well received, and the King requested him to finish his noontime religious
rites in the river, for by that time the foodstuff would be prepared.

Durväsä Muni, along with his large number of disciples, went to take a bath in the river, and Mahäräja Yudishtra was in great anxiety
about the guests.

As long as Draupadi had not taken her meals, food could be served to any number of guests, but the rishi, by the plan
of Duryodhana, reached there after Draupadi had finished her meals.

When the devotees are put into difficulty, they have an opportunity  to recollect the Lord with rapt attention. So Draupadi was thinking
of Lord Krishna in that dangerous position and the all-pervading Lord could at once know the dangerous position of His devotees.

He therefore came there on the scene and asked Draupadi to give whatever food she might have in her stock.

On her being so requested by the Lord, Draupadi was sorrowful because the Supreme Lord asked her for some food and she was unable to supply it at that time.

She said to the Lord that the mysterious dish which she had received from the sun-god could supply any amount of food if she herself had not eaten.But on that day she had

already taken her meals, and thus they were in danger. By expressing her difficulties she began to cry before the Lord as only a woman would do in such a position.

The Lord, however, asked Draupadi to bring up the cooking pots to see if there was any  particle of foodstuff left, and on Draupadi doing so,

the Lord found some particle of vegetable sticking to the pot.

The Lord at once picked it up and ate it. After doing so, the Lord asked Draupadi to call for her guests, the company of Durvasa.

Bhima was sent to call them from the river. Bhima said, “Why are you delaying, sirs? Come on, the food is ready for you.”

But the brahmanas, because of Lord Krisha’s accepting a little particle of food, felt sumptuously fed, even while they were in the water.

They thought that since Mahäräja Yudishtra must have prepared many valuable dishes for them and since they were not hungry and could not
eat, the King would feel very sorry, so it was better not to go there. Thus they decided to go away.

This incident proves that the Lord is the greatest mystic, and therefore He is known as Yogeswara.

Another instruction is that every householder must offer food to the Lord, and the result will be that everyone, even a company of guests numbering ten thousand, will be
satisfied because of the Lord’s being satisfied. That is the way of  devotional service.