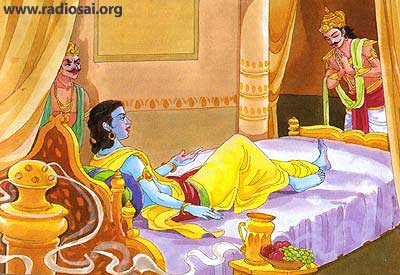 After a while,Sri Krishna woke up and his eyes fell on Arjuna. When he turned around he saw Duryodhana. He wanted to know why they were there at that hour. Arjuna said, “Now you know that the battle will take place. I need you.”

Duryodhana said, “I have also come here to take help from you, and I have come before him so you have to fulfil my desire first.” So Sri Krishna said, “It is true that you came before Arjuna, but I saw him first, and he will I be given the first chance. Besides, he is younger than you. So he will have the first choice.

Duryodhana thought: What a stupid fellow Arjuna is. He wants Krishna alone.

Sri Krishna said, “You want me? But I will not fight. I will only be your charioteer. One of you will have me alone and the other I will have my vast army.”

Duryodhana felt, what could Krishna do alone and unarmed? The best thing for him was to have Krishna’s army.

But Arjuna, being an illumined person, said to himself, “What shall I do with his army? The best thing is to have the Lord with me. The Lord will be able to protect me and the Lord will bring me the victory.” Arjuna wanted Sri Krishna and Duryodhana wanted the entire army of Sri Krishna.

Sri Krishna said, “Arjuna, you are not fighting. Why?” So he came out of the chariot with his discus. He wanted to kill Bhishma. And what was Bhishma’s reaction? Bhishma’s joy knew no bounds. He said, “Come, O my Lord, come! If I die in your hands then immediately I will go to heaven! I am the most blessed person because you are coming to kill me!”

But, both times, Arjuna followed Sri Krishna and said “No, you have to keep your promise. I won’t let you fight, I shall fight. I won’t allow you to eat your words. You come, you sit in the chariot and drive me on. I shall fight.

Here we learn that the Guru, the Master, can at any moment break his own promise in order to help, to save, in order to win a victory for the disciple. Sri Krishna was the Omniscient, Omnipotent, Omnipresent, and also the Just. But when the question concerns a most intimate disciple, the Guru goes against the ordinary light of morality. This was Sri Krishna’s heart for Arjuna.

Victory Is There, Where Dharma Is!

PS: I humbly request all the devotees to please forward and share this moral /

instructive stories they hear so that everyone can be benefited by hearing about Krishna and his dear devotees.