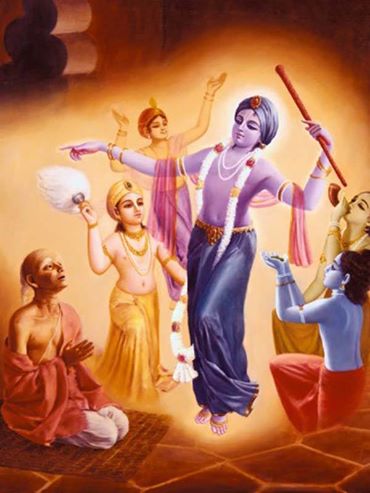 Lord Nityananda born in a Brahmana family in Ekachakra. His father’s name was Hadaya Pundit and his mother’s name was Padmavati. He was the one of the most wonderful child.

He had such beautiful and charming features in every respect. In his childhood he knew no other pleasure but be an acting the pastimes of the Supreme Personality of Godhead.

He would gather his friends together and throughout the entire day they would simply put on places be in acting the pastimes of the Lord.

One of his friend’s would pretend to be bhumi (mother earth) in the form of cow, another friend would pretend to be Lord Brahma and she would plead with Lord Brahma, please the demons in the form of Kings are causing me great difficulties and they would – approach the ocean of milk and another friend would take the form of Lord Vishnu and he would say, all you demigods, you all take birth in the Yodu and – dynasty and I’ll soon appear as lord Krishna.

Sometimes His friends, they would pretend to be Devaki and Vasudeva to give birth to Krishna.

Sometimes one friend would play Putana and another friend would jump on him and suck his breast and kill him.

In this way they would act all these transcendental pastimes and everyone was stuck with thunder. How do they know these pastimes. They never heard them. They have never study them. They are just little children. Lord Nityananda was very fond of organizing these beautiful dramas all day long.

And sometimes they would go and take cows and all day long they would just herd the cows and dance with their sticks and play flutes and pretend to be Krishna and Balaram and the cowherd boys. And then they would come home, they would break into the entire neighbors house and steal the butter and steal the yogurt. People were stuck with wonder. Nobody mind it. Everyone is full of affection. Everyone simply wanted to hold Nityananda in their hands. His body was soft like the butter. They just wanted to embrace him and love him and so their affection to him.

One time he was playing the role as the small child of Lakshmana and another child was taking the part of Ravana. And Lakshmana challenge Ravana and then Ravana took that great empowered shakti ashtra and threw it at Lakshmana.

Of course what they are using in game for the powerful weapon of Ravana was the lotus flower.

So he threw this beautiful soft lotus flower and hit Lord Nityananda in the chest and Lord Nityanda playing Lakshmana fell to the ground and went completely unconscious.

There was not any sign of life in the body. And all his friends gather around and they talk my god, he has no life. He is dead. And they all began to cry. They did not know what to do. And then Lord Nityananda’s parents came Padmavati and Hadai Pundit. They were gathered around and they were crying what we supposed to do. There is no life in his body.

They were doing everything they could to try to revitalize his life. But nothing worked. He laid their completely motionless and silent. Everyone in entire Ekachakra was in a great dilemma their life and soul was lying there life less, what to do?

They could not understand, what a just lotus flower touched him, why he is like this?

Then someone watching, he said I know what the problem is.

Recently he was playing the lila of Dasarath and he also fainted and appeared like this, when of his friend was playing Rama has left him.

So we want to cure Lord Nityananda who is playing Lakshmana then we have to call Hanuman to get the Gandhamadhana mountain so then one of the children put on the dress of Hanuman, he said I am Hanuman I’ll get the mountain.

Then the children remembered, before we started playing this game Lord Nityananda told us that if I fall unconscious get that mountain and bring it here. But they forgot. Now they are remembered.

So one of His friends playing Hanuman, he began running and so many other friends playing Rakshasas, they were trying to stop him. He was defeating, smashing them all and finally he came and he brought the mountain. Another friend played a physician and he took the mountain and put it next to Nityananda’s nose and then Nityananda stood up. And everyone began to embrace him. In this way he spent his childhood.