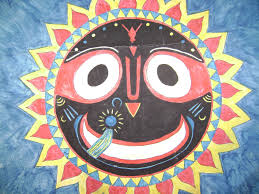 There was once a great devotee of Lord Ramachandra named Raghu Dasa. He lived in Puri under a big umbrella near the Lion Gate of the Jagannath temple. Once when he went to see Lord Jagannath he saw Rama, Laxman, and Sita on     Jagannath’s altar. From that day on he was convinced that Lord Jagannath was non-different from Lord Ramachandra. Raghu developed friendly love, sakhya rasa, for Lord Jagannath.

Once Raghu prepared a nice garland for Lord Jagannath and gave it to the pujari to offer to the Lord. But the pujari did not want to offer it, since Raghu had used a string made from the bark of the banana tree. At that time use of such things was prohibited in Jagannath’s temple. Raghu felt very sad that his garland was not offered to Lord Jagannath. He left the temple feeling very down. Later in the day, the pujari was finishing the evening arati. Before the Lord goes to bed the pujaris dress Him in a special dress called bada sringar-vesa. After dressing the Lord, the pujari started to decorate His body with flowers. But to his surprise, whatever he did, not a single flower would remain on the Lord’s body. The Lord would not accept any of the flowers. All the pujaris became very worried, thinking that they must have committed some offense. But what could it have been? They all decided that to try to understand what offense they had committed, they would all sleep in the temple and fast until the Lord appeared to them in their dreams to inform them of their offense. Sure enough, that same night Lord Jagannath appeared in the dream of the head pujari, and told him,  “My devotee Raghu Dasa brought a flower garland for Me. He prepared it with so much love and devotion. You saw the external feature of the string and denied him permission to give the garland to Me. You could not see how nicely he prepared the garland. He strung it with love and devotion. Now my devotee, being deprived of my service, is lying in his house keeping die garland in front of him. He has not eaten anything and is constantly crying. He has not yet slept. How can I accept any garland from you and sleep peacefully unless My devotee’s desire has been fulfilled?”

Immediately the head pujari woke up and told everything to the other pujaris. Then all of them went to Raghu Dasa and explained their offense, and asked him to give his garland to Lord Jagannath. Raghu Dasa was very happy to hear that the Lord is so merciful that He was personally waiting to accept his garland. Raghu Dasa was in ecstasy.

Once, Raghu Dasa suffered from a very serious disease. His health deteriorated to the point that he could not get up from bed. He had to pass stool in his bed. The smell was very bad. Raghu Dasa, being very ill, passed in and out of consciousness, unable to help himself. One small boy was coming to serve Raghu Dasa. He cleaned his body and put on chandan and offered nicely scented things to remove the smell and purify the room. When Raghu came to his external senses, he found that the boy was Lord Jagannath Himself. Raghu told Lord Jagannath, “My dear Lord, what are You doing here? By doing this low service to me, You are making me an offender. I am becoming more sinful by receiving service from You. O Lord, You are very merciful. You are the Lord of the universe. You are able to do everything. If you want, You can easily cure my disease. Instead of curing me, why are You doing this low service for me?” The Lord replied, “Yes, I could easily cure you. But I want you to be free from all your prarabdha karma so that you will come back to My abode at the end of this life. Also you should know that as My devotees get pleasure by serving Me, I also get pleasure by serving My devotees. I always desire to serve you. There is no difference between Me and My devotee.” In this way the Lord and Raghu had a very intimate relationship.Raghu was very simple and his nature was like a small boy’s. His relationship with Lord Jagannath was very friendly. Sometimes the Lord would come to him in the form of a boy, and they would both play together. It was known to people in general that the Lord came to Raghu to play with him. Everybody respected Raghu. He was very famous and known among the people as the friend of Lord Jagannath.

Once Jagannath came to Raghu and told him to go with Him to steal jackfruit from the Kings garden. Raghu said, “Why do You want to steal jackfruit? If You have a desire to eat jackfruit, then let me know and I will get a nice jackfruit for You.” Lord Jagannath replied, “In this way I am getting everything from My devotee. In fact, I have everything. Mother Yasoda would feed Me so much butter and give Me pleasure. But still I go to the homes of others for the purpose of stealing butter. There is a special pleasure in eating stolen things. Today I want you to experience that pleasure of stealing. Please come with Mel”

Helpless, Raghu agreed to the Lord’s proposal and accompanied Him. Both of them entered the King’s garden. Jagannath told Raghu, “You should climb the tree. I will stand on the ground. You will pluck the best and biggest jackfruit and throw it down. I will stand here and catch it. Then both of us will run away.” Raghu followed the order of the Lord exactly as He had instructed. He climbed the jackfruit tree and located the best and biggest jackfruit and plucked it. “Jagannath!” he called out. “Are You ready?” Jagannath replied, “Yes! I am ready, throw it.” Raghu threw the jackfruit down, expecting Jagannath to catch it. But where was Jagannath? He had run away. No one was there to catch the jackfruit. It crashed to the ground, making a big sound and split open. When the King’s gardener heard the sound, he understood that someone had entered the garden to steal jackfruit. He immediately ran to the spot and found the big jackfruit lying split open on the ground, yet he didn’t see anyone around. When he looked up he saw Raghu Dasa sitting in the tree. The gardener immediately ran to the King and told him that Raghu Dasa was stealing jackfruit from his garden. “He is still there sitting on the top of the tree!” he told the King excitedly. The King could not believe that Raghu had entered his garden to steal jackfruit. So the King gathered his ministers and went to the spot where the gardener indicated. He was surprised to see Raghu Dasa sitting in the tree and the jackfruit lying on the ground. On the request of the King, Raghu came down from the tree. The King asked Raghu, “My dear . Prabhu, if you desired to eat jackfruit, why have you gone to the trouble of coming to my garden in the middle of the night and climbing a tree? You could have told me. I would have picked the jackfruit and sent it to your house.” Raghu told the King the whole story about how he was cheated by Lord Jagannath. Everyone enjoyed hearing the pastime of the Lord, and they all laughed. They glorified Raghu for his greatness. In this way, Raghu would have pastimes with Lord Jagannath in the mood of friendship.

A devotee gave an eye witness account of one lila of Raghu Dasa with Lord Jagannath. Once during the Ratha-yatra, the Lords had taken Their seats on the chariot. After the King swept the road, everything was ready for the chariot to move. Thousands of people pulled the rope, but the chariot would not move. Seeing the situation, the British Saheva arranged for a powerful elephant to pull the chariot. Still the chariot would not move. The Saheva told Raghu Dasa, “Raghu Dasji, what kind of Lord is this? I have engaged elephants, yet this chariot will not move.” Hearing this, Raghu climbed the chariot and went close to Lord Jagannath. He spoke into the Lord’s ear. Immediately the chariot started to move. Saheva was surprised to see this. He told Raghu Dasa, “You are perfect and your Lord is also perfect.” Wherever Raghu Dasa lived he would leave a pot full of prasada outside for anyone to take. He would take prasada from the same pot the animals and birds took from. This was his wonderful nature. He was very dear to Lord Jagannath.