Lord Jagannath story: The Story of Lord Purusottama and the Bhils [a tribal group] 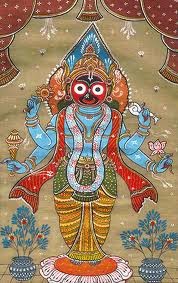 According to Skanda Purana, the idol of Lord Neela Madhav [Lord Purusottama], an earlier form of Lord Jagannath used to be worshipped by some tribal people and their chieftain Vishwavasu.

However, the Purana does not give an account of when and how the tribe became associated with the worship of the idol.

In one of the chapters of Padma Purana there is a short description about Bhils [a tribal group] which may have a remote or direct association with Vishwavasu and his tribe.

The story below relates how these Bhils got the opportunity to visit the Nilgiri Hill and the Idol of Lord Purusottama.

As per the story, King Ratnagriva of Kanchi had a long cherished desire to make pilgrimages to extremely sacred places.

One day he saw a Brahmin hermit in his dream and just the day after, a very thin Brahmin appeared in his court.

The king requested him to recommend some pilgrim sites that ensure freedom from the cycle of birth and death to those who visit them.

The hermit told him about several sacred places and at last he said about the Nilgiri Hill [Blue Mountain], the holiest place on earth and the extraordinary archer Bhil tribe he found living there.

The Bhil people had four hands and the Brahmin related to the king how the tribe got its divine physical form. He said exactly what the Bhils had told him about it.

The Bhils lived on the fruits and nuts from the forest.

Once one of the Bhil boys, while picking berries, wandered into the area where the hill was and climbed on to the top.

There he was surprised to find a unique temple.

The walls of the temple were of pure gold and studded with precious jewels.

Out of curiosity, the boy entered inside and saw the idol of Lord Purusottama.

He also saw some other gods lost in singing prayers, some were dancing in ecstasy and some others were guffawing in strange ways.

He also witnessed that the gods worshipped the idol of Lord Purusottama and offered food to Him.

After the gods left, the boy came out of his ambush and found some grains of cooked rice lying on the floor.

Evidently, it was the Prasad that had fallen on the floor during the worship.

The boy ate the Prasad and had a darshan of Lord Purusottama.

And then, immediately after that, much to his surprise, he discovered that he had grown two more hands on his body!

He returned home and recounted the story to the shocked Bhils. Then the Bhils also went to the temple.

They saw the idol, ate the Prasad and got transformed into the four handed form.

At the end of the story, the hermit added that he himself had gone to the top of the hill to see the idol of Lord Purusottama and acquired the aforesaid unique physical attribute.