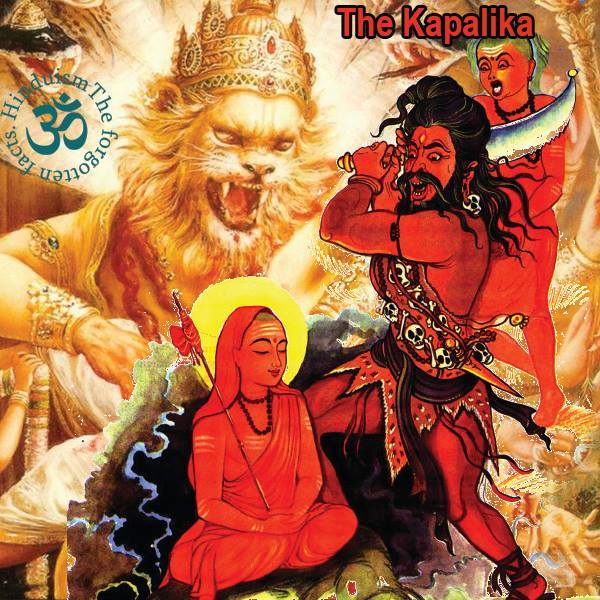 In course of time, the party reached Srisailam hills in Andhra Pradesh.

In those days, there lived a sect of religious fanatics called the Kapalikas, who believed in human sacrifice.

One day Sri Sankara was sitting deeply immersed in meditation.

At that time, a Kapalika came before him.

He woke up Sankara from his meditation and told him that God Kapali would appear to him if he sacrificed either the head of an emperor or the head of a great Sannyasin.

Sankara was amused. He smiled and said that he had no objection whatsoever to surrender his head.

He would come to the temple of Bhairava at midnight without the knowledge of his disciples.

Overjoyed that his wishes would be fulfilled, the Kapalika got busy with the preliminary rites of worship before the human sacrifice.

Sankara got up from his bed at midnight and left for the temple of Bhairava.

Padmapada sensed some danger to his Guru. He earnestly prayed to Lord Narasimha to protect his Guru.

Padmapada ran to the spot and with the mighty strength of a lion snatched the sword from the hands of the Kapalika.

He then jumped on the Kapalika and tore him to pieces.

Sankara saw Lord Narasimha before him and was overjoyed.

He at once composed a thrilling hymn on Lord Narasimha.