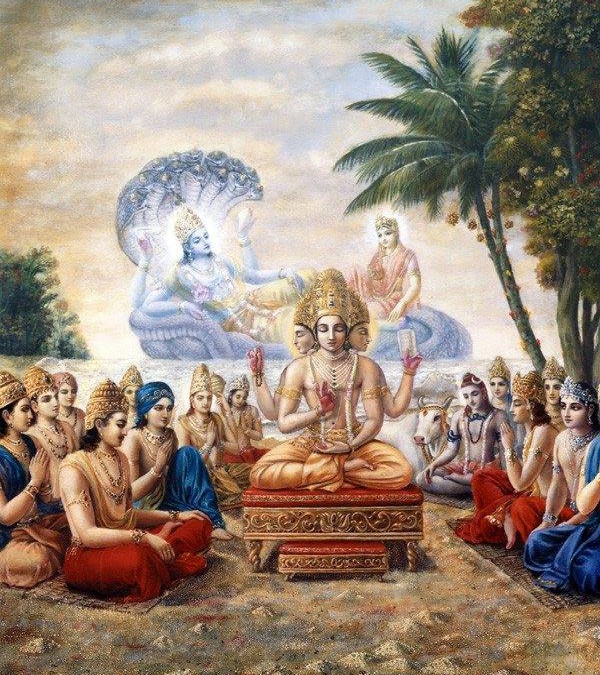 The month of Damodara is a very special month. Because everything you do in that month, you get multiple benefits.

There was a Shankaasura, who he was so horrible that the devas were hiding in a cave from him in Mount Meru.

So he didn’t know where they were.

So he decided to go to the Satya Loka and destroy the personified Vedas and, in this way, the devas, if they don’t have the Vedas, they would lose their potency and he would reign.

He went out to the Satyaloka, but the personified Vedas got the wind that he was coming and ran out; he chased them.

So he thought they must be hiding somewhere.

So he started looking at all the underwater caves, mountains, “Where are the personified Vedas?”

But the Vedas had dissolved.

So the devas thought this is our chance, we have to go; only Vishnu can save us.

So they went to the side of the milk ocean and they began to chant – they thought, “As this month is the last month of the rainy season, the Lord takes rest now. If we just abruptly wake Him up maybe he will be angry and it will not be useful. So let us chant Hare Krishna and then, in this way, if He wakes up He will be very happy.”

So Lord Kshirodaksaya Vishnu woke up and He was really happy to see all the devas chanting.

He felt so happy that He said, “On this thithi, in this month, (for) whatever Krishna conscious activities, whatever spiritual activities done, I will give 100 times of benefit.

So that’s why you get a 100 times the benefit in the month of Lord Damodara.

In fact, it can liberate your forefathers. So we have been encouraging our devotees to get people to chant.