Krishna story: The crow and swan! 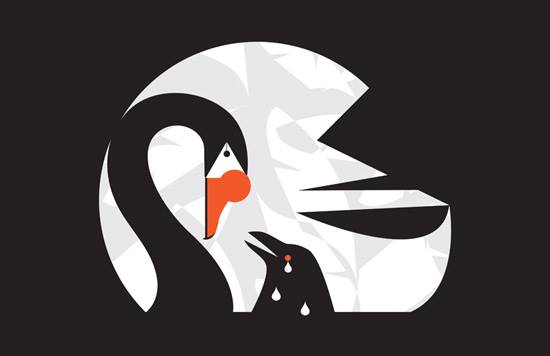 Once there lived a crow that was the favourite of three boys. Every day, they fed him with the remnants of their food. When the crow used to eat the remnants, the boys would praise him and admire his beauty.

The admiration of the children filled the crow with pride and he believed himself to be the most handsome, cleverest bird in the land. Just then, he spotted a flock of swans, and the sight irritated him! The crow shouted, saying that the swans were ugly, and that he would not tolerate any ugly birds in his territory. The leader of the swans heard this as he was gliding by. He replied to the crow, saying that nobody would say a swan as ugly and told the crow that nobody can equal a swan in beauty and flying.

The crow got angry and replied, saying that swans are not good fliers and that he knew many tricks in flying and showed his tricks to the swans.He turned several times in the air like an acrobat. He made Zig-Zag patterns and he even flew upside down in the air for a bit.

The leader of the swans told the crow that he could beat the crow in flying and challenged him to fly over the sea.The crow took the challenge, and the competition began at once.

The swan gradually gained height and speed. Soon, the swan was flying effortlessly across the ocean.But the crow was so exhausted, he could barely keep himself above the water.

The crow was about to drown and he shouted for help. The swan returned, and taking pity on him, the swan then took him on his back and flew towards the shore. He placed the crow gently on the sand.

The crow told the swan, “Brother swan! You are my superior. I was intoxicated by false pride and thought my position to be very high. And so, I offended you all. I have understood my position. I am only a crow. Please forgive me.”

We see from the story, how, the crow , intoxicated by pride, offended the swans.

The story reminds us of the following verse from Srimad Bhagavatam (11.5.9), Sri Camasa(One of the Nava Yogendras) says to King Nimi:

“The intelligence of cruel-minded persons is blinded by false pride based on great wealth, opulence, prestigious family connections, education, renunciation, personal beauty, physical strength and successful performance of Vedic rituals. Being intoxicated with this false pride, such cruel persons blaspheme the Supreme Personality of Godhead and His devotees.”

If we are intoxicated by our wealth /material possessions or somebody admiring/praising us, we forget our position as an insignificant living entity eternally servants of Lord Shri Krishna.