Krishna story: That is the moon, the toy of God! 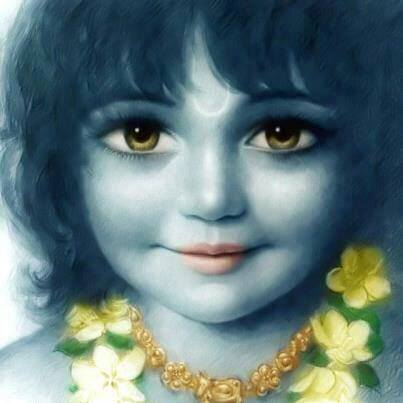 One night, Lord Krsna looked in the sky, and saw the full moon of the autumnal season.

On this day, the Vrajavasis have a nice festival of cooking sweet rice for the Lord.

Seeing the moon, Krsna asked Mother Yasoda, “What is that, mother?”

The mother replied, “That is the moon, the toy of God.”

Although His mother gave Him all categories of worldly toys, Krsna did not care for them. He wanted the moon as His toy.

At this, His mother spoke with great love and affection, “Krsna, this toy is of God.”

To this Lord Krsna responded, “Why, do you think I am less than God? I am the Almighty God. Give Me the toy.”

Hearing this from Krsna, whom she considered her son, Mother Yasoda said, “O Krsna, do not speak like this. You may offend God.”

Lord Krsna wanted to perform a specific pastime; therefore, He showed His mother His determination to have the moon as His toy.

His mother did not know what to do, so she took shelter in the Lord.

The Lord, who is demanding the moon as His toy, heard her prayer and planted in her mind the idea of Him marrying.

Therefore, she told Krsna, “When You grow up, we will get a nice wife for You and, by having her, You will become a king.”

Hearing this, Krsna stopped troubling His mother for the moon.

In this way, He created many pastimes to please His devotees.

Mother Earth also became very pleased by having an opportunity to have Krsna and Balaram walk upon her with Their small and soft lotus feet.