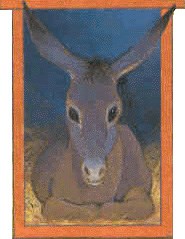 “One washer man was there who had a donkey. His name was Sunanda Gandharva. That donkey served the washerman for many years. At last he became old and died. So the washerman shaved his head and had dip in the holy water. That washerman used to wash the king’s clothes. When he went to the king’s palace to get clothes, the king’s priest saw him and asked, “Hey, why have you shaved your head? Don’t you know? Sunanda Gandharva died–very, very auspicious day today. Shall I shave my head?Oh yes, you shave your head.” So then the chief minister saw the priest’s shaved head and asked why. Same answer, so he also shaved his head. Then the queen saw the king had shaved his head. She asked, “Why have you shaved your head?” The queen was a bit intelligent.”Oh don’t you know, my dear queen? Sunanda Gandharva died–very, very auspicious day.”

“Who is he? Who told you? What is the source?” She wanted to know the source. “Oh, chief minister told me.” The queen called for the chief minister, “Hey, who is Sunanda Gandharva? “Oh queen, I heard from the priest, I told the king and the king heard from me. Our priest, priest he has said.”

The priest was called for and the queen asked, “Who is that Sunanda Gandharva? From who have you heard? You said shave head, so all are shaving their heads, the chief minister and the king.”

“The washerman who cleanses the dirty clothes! So a low-caste person who has a low level of consciousness. You heard from him! And you accepted it as a very, very auspicious day. All right, call for that washerman.” The washerman was called for. The queen asked, “Who is Sunanda Gandharva?”

This such thing is going on in this material world. Therefore in the spiritual sphere one should hear from bona fide acarya, mahajana sadhu, who is bona fide authority. We have to follow the path. Mahajanas say, “That is truth”, and we should accept as truth, yes. Then there will be no problems at all. No disputes at all, yes. Make advancement in this path of devotional service–otherwise how can you make advancement?”