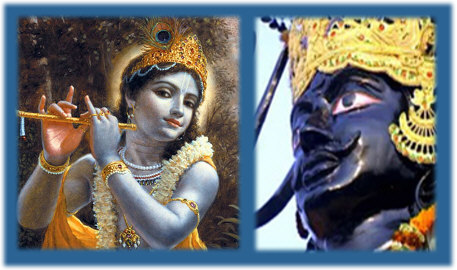 Hearing the news of the birth many saints and gods visited Nandgaon to see Lord Krishna, one among them being Shanidev.

Everyone was allowed to have Krishna’s darshan except Shanidev.

Yashoda stopped him at the door and saying that her son would be frightened at the sight of Lord Shani.

Shanidev was highly disappointed and went to the nearby forest and prayed, “O God! I am your servant. You have appointed me to judge and punish sinners according to their karmas. Then why does everybody think of me as being malignant and cruel; why do they avoid even my shadow?

Today, when all gods and demi-gods could enjoy the bliss of your darshan, I am denied that right and benediction.”

Touched by his prayer Lord Krishna manifested Himself to him.

He advised him to stay near Nandanvan and granted him the boon that anyone who came to his temple to pray would immediately be freed from all worries and afflictions.

Even powerful Shanidev was not allowed to stay in Vrindavan.

Because Krishna know that by his presence there will so many troubles and disturbances in Vraja. And Krishna do not like Vrajavasis to suffer.

But because Shanideva is great devotee and has such great desire to meet Krishna He give him eternal residence at Sri Vrindavan dham.

And that place where Shanidev was allowed to stay is exactly on border of Vraja Mandala parikrama. So Shanidev there is in Vrindavana and in same time is not.

That part of the forest where Lord Krishna appeared before Shanidev, has since been called Kokilavan and one can visit the renowned and ancient temple of Lord Shani (Saturn) today which is just six km from Kosi (UP) on the Nandgaon-Barsana road.