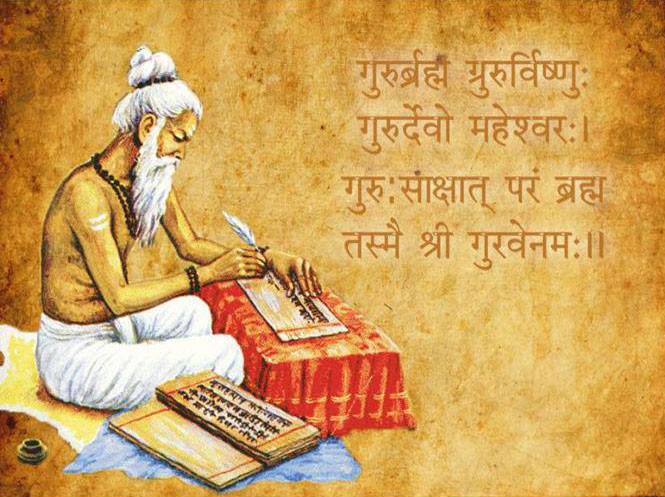 He had intense desire to master the vedic knowledge.

But he knew that he can live only for a maximum hundred years.

So he executed severe penances and pleased Lord Indra.

Indra appeared before him and the sage requested Indra, “Please give me hundred more years so that I can complete studying the three vedas”.

Indra said,”thathasthu(let it be so)”. Then the sage Bharadwaja studied the vedas continuously.

In this way he did five times.

When he prayed again to Indra for further longevity, Indra appeared before him and he decided to instruct the rishi.

When the sage saw the mountains he thought, “Probably this represents the vedic knoweldge I’ve mastered.

The three mountains may represent my mastery over the three vedas”.

To his surprise, Indra took little mud from each mountain and it became his handful.

He said to the sage, “This is what you’ve learnt from the three vedas. The rest is what you need to know. It may take many many lifetimes to do this”.

The sage was shocked. He thought, “I’ve extended my visa(!) 5 times to stay here so that I can complete the vedas. Still I’ve done only a little study.It means vedas cannot be completely studied by anyone”.

Then he asked Indra what to do.

Then the sage went to mattapalli(a place in Andhra pradesh), purified himself by bathing in river Krishna and meditated on Lord Narasimha. Being pleased with his penance, Lord Narasimha appeared and bestowed him a residence on Vaikunta.

Usually, scholarship in vedas and a person’s ability to recite them with perfect pronunciation is taken as the qualification for considering a person to be “spiritual”.

However the quantum of vedic study and one’s ability to recite them is not as critical as understanding the Supreme Lord who is the goal of the vedas.

Because when one understands Lord Narayana who is the goal of vedas all the vedic knowledge is revealed to him.

On the contrary if a person knows all the vedas, there is no guarantee that he’ll understand the Lord as it is only by the Lord’s mercy can we understand Him.

And it is not possible for any person to study the vedas completely. Becasue it is said,”vedo vai anantah” (vedas are endless).

So the goal of all the vedas is to realise the Supreme Lord who is the central theme of the vedas.

Krishna confirms this in the Gita by saying, “vedais ca sarvair aham eva vedyah – By the study of all the vedas , I’m alone to be known.”