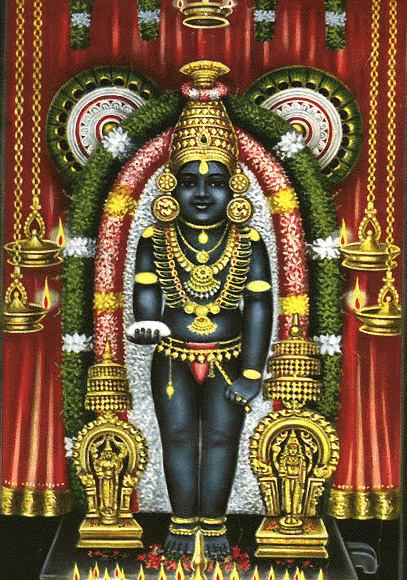 Following is one more instance which occured few hundred years ago in the life of a great devotee called Poonthanam.

He was ardent devotee of Lord Guruvaayurappan (Lord Krishna).

He led his life of 90 odd years reading the Bhagavatam and singing the Lord’s glories in simple Malayalam, just to please the Lord.

He used to walk about 100 kilometers to take darshan of Guruvaayurappan every month.

The route to the temple was very dense and it was very unsafe to walk through that way even in the day light.

Once on his way, in the forest he was attacked by some robbers.

He gave them everything he had the money and his ring, still they were at him.

They were after the small packet he was clinging to.

It was his whole treasure the Bhagavatam book, which he did not want to part with.

When Poonthanam said it was only a book, the thieves were not convinced.

He closed his eyes and cried out for Lord’s help.

That lonely place was filled with the roars of the robbers and the loud Narayana chanting of Poonthanam.

Hearing the noise a man came on the horse and fought with those dacoits and got the money and the ring back for Poonthanam.

He introduced himself as the minister of the Zamorin Raja who happened to be passing by.

Poonthanam was very happy; he thanked the young man and offered him his ring as a gift.

The minister accepted the gift and guided him up to the temple and disappeared.

The same night, the head priest of the Guruvayur temple had a dream wherein he was told, “You will find a ring on the Deity. Give it to Poonthanam, who will come tomorrow.”

Quite miraculously, next morning when the head priest went to the temple to do the puja he saw a ring on Deity’s finger.

Poonthanam was promptly there at Guruvayur temple for darshan.

Head priest came out from the Deity’s room and gave Poonthanam the ring and told him what happened.

Poonthanam was flabbergasted to see that the ring was his own, which he had presented to minister, the day before.

He then realized that indeed it was his beloved Lord Guruvayurappan Himself, who came personally in the guise of a minister to rescue him.

“I do not see any possible shelter other than Your two lotus feet, which are just like a refreshing umbrella that pours down showers of delicious nectar”, we need to firmly trust that the Lord is the only shelter unconditionally.

This is a beautiful prayer by Queen Uttara when Ashwathama shoots the Brahmastra weapon to kill the the baby in her womb.

Uttara said: “O Lord of Lords, Lord of the universe! You are the greatest of mystics. Please protect me, for there is no one else who can save me from the clutches of death in this world of duality.” Srimad Bhagavatam 1.8.9.

In the above pastime we see how Lord at once took up His personal weapon to protect His devotees, who did not know anyone other than Him.

In his wonderful purport to verse 1.8.13 His Divine Grace Srila Prabhupada explains – “Ashwathama released the weapon just to finish all the male members of Pandu’s family; therefore in one sense it was more dangerous than the atomic bombs because it could penetrate even the most protected place and would never miss the target.

Knowing all this, Lord Sri Krishna at once took up His personal weapon to protect His devotees, who did not know anyone other than Krishna. In the Bhagavad-Gita the Lord has clearly promised that His devotees are never to be vanquished.

And He behaves according to the quality or degree of the devotional service rendered by the devotees.”

We have heard many pastimes wherein the Lord personally comes and helps immediately as soon as His devotees call.

The quality of all the devotees in the above pastimes is that all of them cried to the Lord and believed only Him to be the sole protector.

They completely surrendered to the Lord 100%. So as and how we surrender unto Him, the all merciful Lord reciprocates according to the level of surrender.

Lord loves all of us and He would definitely help us if we call Him devotionally. He is our only savior.