Krishna story: Remember your Guru before any action! 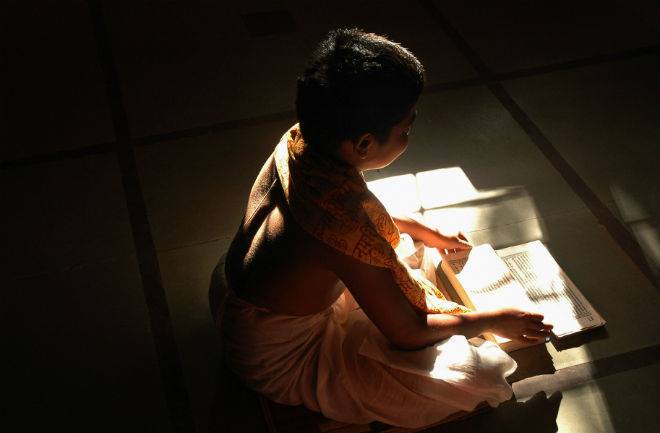 Once young boy went to a Gurukula to learn the Vedas.

He was so excited since his master was renowned and was adept at Shastras. He went to his master and thus said – “My dear Sir, I would like to learn Vedas from you”.

The master immediately replied “Oh Dear Boy, it is not a one or two year course. It is a twelve year course. Are you ready to learn Vedas”?

The boy was extremely passionate and immediately signed up for the course. In the ancient system of Vedic education the student goes into a Gurukulam and learns the Vedas for twelve years.

So this boy enrolled with the master and learned the Vedas for twelve years.

At the end of this course, there is an examination to certify that the student has passed all the courses.

When it was time for the boy to graduate [Samavarthanam connotes graduation of a Brahmachari learning the Vedas].

This boy fixed the date with the master for graduation.

On that day, when the boy went and presented himself before his master for graduation, his master told him that he was very busy and that he would not have time to conduct the exam for him.

It is a normal procedure for the master to have his disciples recite certain portion of the Vedas and they are graded appropriately.

He asked the boy to go to the backyard and stand next to a particular tree. He asked him to recite a certain part of the Vedas [Anuvaka].

The tree upon completion will shed some leaves.

This was a new test for the little boy and he was eager to take the novel test.

The boy was cognizant of the fact that before reciting the Anuvaka, he had to invoke Lord Ganesha.

The moment he invoked Ganesha, all the leaves from the tree had fallen down.

This little boy was baffled by the incident.

He went into the master’s chamber and narrated the whole incident.

The master immediately knew what had happened. He told him that before one invokes Lord Ganesha, Lord Krishna or any other deity, one need to do a Dhyana on his Guru.

Guru bestowing us with the knowledge of the Lord is not a normal human being and that is the first person we got to think about when we begin any event and by doing so that will automatically lead to other positive thoughts.

The moment one thinks about the Guru, that form of the Lord who has incarnated on the earth to save us he will be liberated.

We should always meditate on our own Guru and be thankfully for all gifts of spiritual wisdom we have received from him.

On other side we should not speak publikly about him and revial him to others. When men has great wealth and gems he do not show them to the world. He hide them secretly. Similarly relationship with our Guru and our spiritual realizations should be kept deeply in our heart and not shown to the world.