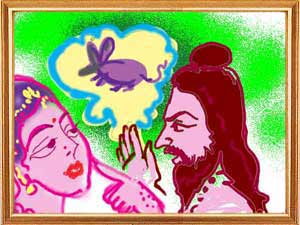 Once upon a time there lived a sage on the banks of a river. He and his wife did not have any children.

One day when the sage was praying in the middle of the river, an eagle happened to pass by and dropped a female mouse in the hands of the sage.

The sage found the mouse in his hands on opening his eyes. He took it home to his wife.

On reaching home, he talked to his wife about the mouse and they decided to convert the mouse into a young baby girl.

The sage and his wife began to take care of the girl child and brought her up as their daughter.

The child grew day by day to a beautiful maiden. At the age of sixteen, the sage decided to find a match for the girl.

He and his wife decided that the Sun God would be an ideal match for their girl.

So the sage prayed for the Sun God to appear. The sun god appeared and the sage asked him to marry his daughter.

But his daughter said, “Sorry! I cannot marry the sun god because he is very hot and I will be reduced to ashes in his heat and light.

The sage was displeased and asked the sun god to suggest a possible groom. The sun god suggested the name of the Lord of the clouds. For, the cloud can easily stop the rays of the sun.

The sage then prayed for the lord of the clouds and once he appeared, he took him to his daughter.

The daughter once again decided not to accept him as his groom.

She said, “I do not want to marry a person as dark as him. Moreover, I am afraid of the thunder he produces”.

The sage was dejected once again and asked the lord of clouds for a suitable groom.

The lord of clouds suggested, “Why don’t you try the lord of wind, for he can easily blow me away”.

The sage then prayed for the lord of the wind. On the appearance of the wind-god, he took him to his daughter.

His daughter rejected the groom saying that she cannot marry the wind god who is always on the move.

Dejected once again the sage asked the wind-god for a suggestion.

The wind-god suggested the lord of the mountain which was rock solid and stopped the wind easily.

So the sage then went to the mountain lord and requested him to marry his daughter.

But the daughter once again rejected the mountain lord saying that he was too cold-hearted for her to marry and requested the sage to find somebody softer but stronger than him.

The mountain god then suggested a mouse to him, because the mouse is soft and yet can easily make holes in the mountain.

This time the daughter was happy and agreed to marry the mouse.

So the sage said, “Look at what the destiny had to offer you. You started as a mouse, and were destined to marry a mouse in the end. So be it”.

He then converted her back to a she-mouse and got her married.