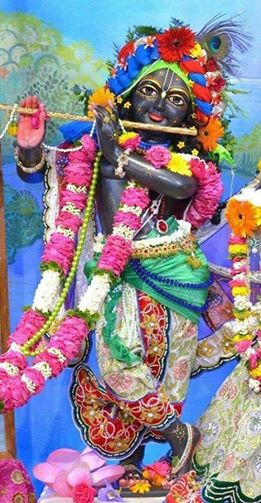 There is an interesting story of a poor boy who was a student in school.

During an annual Father’s Day ceremony, the teacher requested the stu dents to give some kind of a contribution.

Formerly teachers would not earn a salary but would receive whatever the students would bring from their parents’ homes or by begging.

Generally the brahmanas were teachers, and they could not charge anything.

This one student was so poor that he could think of nothing to bring; therefore he told his teacher that he would speak to his mother first.

After school, the student told his mother, “My dear mother, all my class mates have promised to contribute something to the teacher. What shall I contribute?”

The mother replied, “My dear son, we are so poor that we cannot give anything. However, Krsna is the friend of the poor. If He gives you something, you can promise it to your teacher.”

“Oh, where is Krsna?” the little boy asked.

“Well, I understand that He is in the forest,” the mother said.
Therefore the little boy went to the forest and called for Krsna.
He then began to cry, and finally Krsna came.

When a devotee is very eager to see Krsna, Krsna is so kind that He comes.

“So, what are you asking?” Krsna said to the little boy.

“You are the friend of the poor,” the little boy said. “I am very poor, and what can I promise my teacher?”

Krsna then told him, “You can tell him that you will sup ply him some yogurt, some dahi.”

The little boy was very satisfied with this, and the next day he went to his teacher and said, “I will supply you as much yogurt as you need.”
The teacher felt that this was very nice, and he was pleased with the boy.

On the day of the ceremony, the boy again went to the forest and called for Krsna….

Krsna appeared and gave him a quart of yogurt.

The little boy took this yogurt to his teacher and said, “This is my contribution, sir.”

The teacher looked at the quart and said, “What is this? Hundreds of people will be coming, and you have only given this much yogurt?”

This is the nature of Krsna.

One can take everything, and yet the same will remain.

If we love Krsna, that love will not be destroyed as love is in the material world.

However, in the spiritual world, if the servant cannot serve under certain conditions, the master is still pleased.

And if the master does not pay, the servant is also pleased.

That is called oneness, absolute.