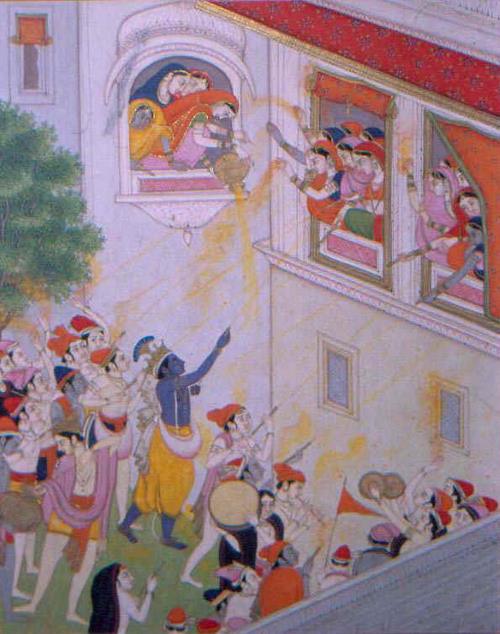 Holi is the most colourful festival of Braj. Krishna has a gala time with his Gop and Gopi friends during this festival.

One day all the Gop sakhas got together and headed towards Nanadbhavan to play Holi, but as soon as Krishna heard all the noise, he quickly ran inside the house and hid in Yashoda Maiya’s lap.

He told Maiya, “Maiya, Maiya, I am scared of color and these sakhas put on so much on me and i am alone. Please hide me.” Finally Maiya was convinced by the sweet words of Gopal.

This meant that all the Gops were getting ready to shower Gopal with different colors. They were armed with syringes of colorful water, waiting to attack Lala.

Lala was hearing all the noise. He begged his mother, “Please go outside and tell them I am not home.”

Mother Yashoda was most loving; so she came out and told them the same thing.

But Gopal’s sakhas did not accept her statement for they very well know the real nature of their leader.

One of the brahmin sakha of Gopal named Madhumangal told Maiya, “we will not believe unless and until we go in and check thoroughly.” finally Maiya had to agreed and allow Madhumangal to go in.

He started to look for Kanha and after a long search he found Kahna was hiding in one corner of a room.

Madhumangal asked Kanha to come out and play Holi.

He chastised Kahna for lying and got angry in a loving way.

He shouted at him – ” Tadhike {a Brijwasi abuse} jooth bole hai apne sakhase , dekh lala aai to acchi baat nahi.” (You… How dare you lie to your own friends ? Most improper !)

Still, Kahna did not agree to come out.

In stead he told Madhumangal to go out and tell all the sakhas that Kahna is not in.

However Madhumangal said bluntly that he could not tella lie under any circumstance.

He kept on insisting that Kanha should come out for Holi.

Naughty Lala got a brilliant idea.

He knew how much Madhumangal loves laddus.

Finally, he promised lots and lots of laddus to Madhumangal if only he would go out side and tell all the sakhas that Kahna is not in and he would make all of them go away. Then he would be saved from not playing Holi.

Also being a laddoo-loving Brahmin he could not resist this deal.

Lala, the perfect gentleman, solemnly kept his side of the deal and immediately handed over to Madhumangal huge piles of laddoos.

Madhumangal, mighty pleased, agreed to go out to make the announcement as taught by Sriman Krishna Kanhaiyalal Maharaj.

All the sakhas were eagerly waiting for Lala.

Madhumangal, who is after all, a simple hearted Gopa-boy, does not know how to lie. He does not even know what a lie is.

He said -”Lala is hiding inside and asked me to tell you that he is not inside, so please go away.”

You can not imagine WHAT happened then !!!

As soon as they heard this statement, all hell broke loose !

The boys shouted “Ho Ho Ho Hori haaaaaaaaaaai !” and they rushed right inside Nanadbhavan. Ohh ! What a din they created !

They clapped and jumped and laughed in glee.

They dragged Kanha from under the bed and dunked him in all sorts of colors.

They bathed him with colour-water. Lala also played with them in a similar way as he is – Bhakta-bhilasi charita anusari— as per the desire of bhakta, Krishna also reacts to fulfill their desire.

All of you are welcome to Nandbhavan to play holi all day long too until you drop.