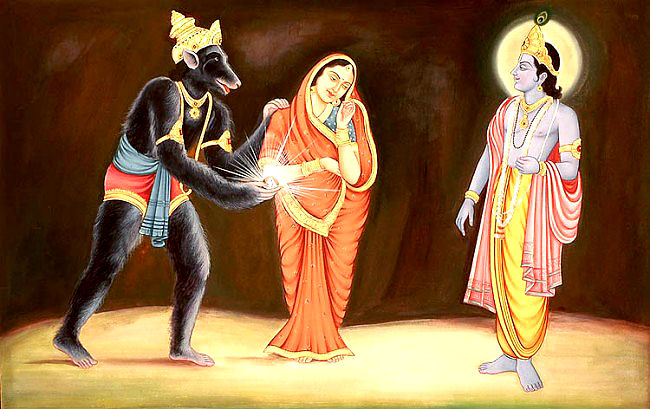 We all know that Bear-king called “Jambavan”was an obedient servant of Lord Rama, and he fought along His side against Ravana.
Jambavan was so powerful , that when he was young and when Lord appeared as “Vaman Dev” and He expanded Himself to take away everything of Bali Maharaj, at that time Jambavan did seven Parikrama of Lord, in a very short time.
This was told by Jambavan to his friends when they wanted to cross over Lanka.
Even on the battlefield in his old age, he just gave one kick to Ravana and Ravana fainted, such was his strength.
In all his life, he never got any strong opponent to fight and this desire of fighting remain unfulfilled.
He told this desire to Lord Ram.
Lord promised him that He will fulfill his desire to fight in next incarnation in Dwapara yuga and also told him that when I will defeat you in the fight, that time you will understand who I am.
So when Lord came in His all opulent original form as Krishna, He had a pastime to fulfill the desire of Jambavan.
While passing a jungle He saw a very beautiful woman, who was very attracted toward Lord.
Lord wanted to marry her but she was afraid of her father, with whom Lord will have to fight and her father was none other than “Jambavan ” of treta yug.
Lord accepted the challenge,and there was a great fight between the two, Jambavan was tired and exhausted and was surprised with his opponent, still not remembering the Lord and finally when he fell down, at that time he realized what a mistake he had done by fighting with his Master.
With tears in his eyes, he immediately felt at the Lotus feet of the Lord.
The Lord embraced him and in turn Jambavan happily handed over his daughter to the Lord.
She was none other than “Jambavati” one of the eight dearmost Queen of Lord.
Moral of the story:
How merciful Lord is? Ever ready to fulfill smallest desire of His devotees, only requirement is PURE DEVOTION.
In this regard, there is a very nice quotation from Ramayana referred in CC Madhya lila 22.34.

Translation: It is My vow that if one only once seriously surrenders unto Me, saying, “My dear Lord, from this day, I am Yours,” and prays to Me for courage, I shall immediately award courage to that person, and he will always remain safe from that time on.”