Krishna story: How Narada Muni get his guru? 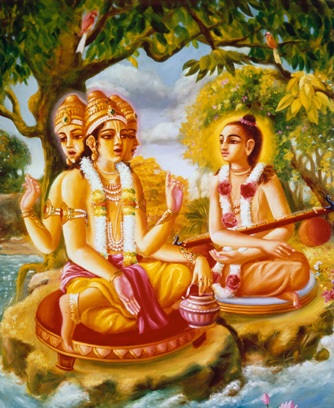 Did you know that at one time Narada Muni did not have a Guru?

At that time He was already travelling the Three Worlds.

One time He attended an Assembly at Svarga loka, where all Devas and Devis are present.There are all 33 crores devatas and all the Nine Planets.

There was a sacred fire, Vedic rites being conducted. Narada was given a place to sit, below everyone else.

He questioned Brahma, stating as Brahmas own child, why was He given such a lowly place to sit?

Brahma told Him, it was because He has never taken a Guru.

Narada considered this, and realized He did not have a Guru mantra.

In other words, though He always sings the Names of God, and repeats Gods Name as a mantra, He has never taken a mantra as initiated by a Guru.

And He told the Gods, Whoever I see at dawn, I will take as my Guru. Narada Muni then left the assembly with the promise to return soon.

Where did He go?

It was at dawn He saw an old fisherman with a net on shoulder, both walking and weaving his net.

The old man said he was not worthy.

The old man said, he had never himself taken initiation from a Guru and that he did have any mantra to give.

Nevertheless, Narada requested from the old man to speak whatever was in his mind at that very moment.

The fisherman said Hari Bol, upon which Narada returned to the assembly of Devas and was given a seat in front of the Assembly having declared He now has both a Guru and a Mantra.

The assembly demanded to meet His Guru, upon which Narada returned to the Fisherman and requested the old man to come.

Narada presented the old man to the assembly and then gave His full pranam, lying completely down before His Guru.

The 33 crores of Gods were surprised.

At that moment the old man became Shiva before all of them.

For Shiva was not at that Assembly. And so, what kind of Assembly was it?

And so we understand, the Guru of Narada is Shiva Himself. At another case father of Narada Muni is also his Guru because he give him knowledge of Srimad Bhagavatam.

This story illustrate how everyone should have proper guidance from spiritual
teacher on his path of bhakti.

Guru often can manifest to us in a ways which we often cannot recognize.

Guru who direct us to Krishna may not be always Swami with long bear. Krishna can manifest throw everyone and help us advance.