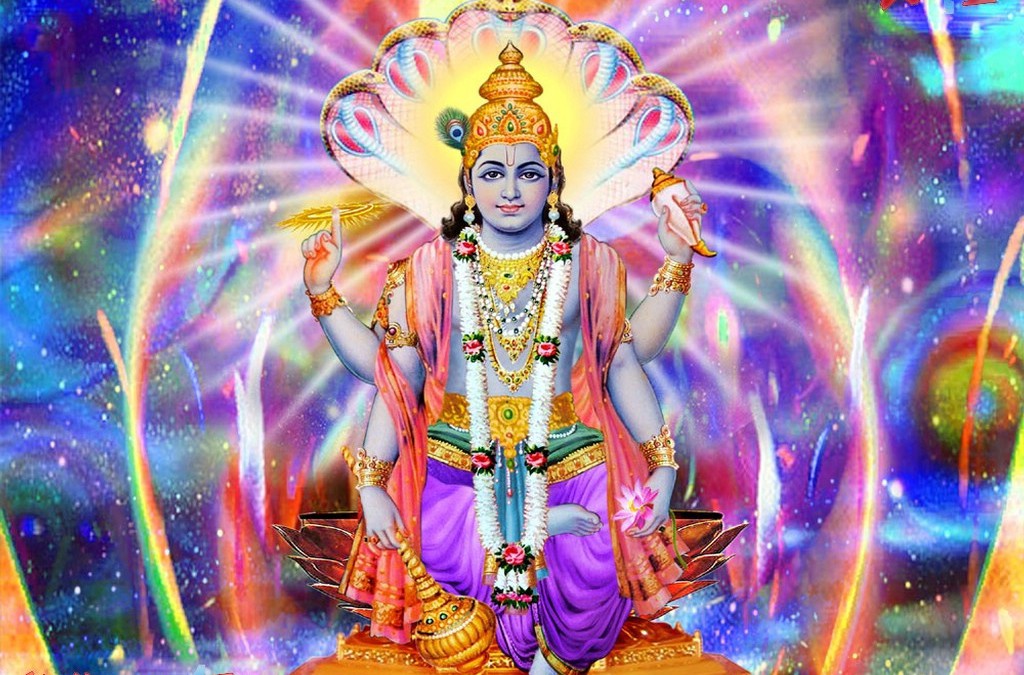 Once the great sage Jaimini Rsi said to his spiritual master Srila Vyasadeva, “Oh Gurudeva! Previously, by your mercy, you described to me the history of the glories of the Ganga river, the benefits of worshipping Vishnu, the giving of grains in charity, the giving of water in charity, and the magnanimity of drinking the water that has washed the feet of the brahmanas. O best of the sages, Sri Gurudeva, now, with great enthusiasm, I desire to hear the benefits of fasting on Ekadashi and the appearance of Ekadashi.

“Oh Gurudeva! When did Ekadashi take birth and from whom did she appear? What are the rules of fasting on the Ekadashi? Please describe the benefits of following this vow and when it should be followed. Who is the utmost worship able presiding deity of Sri Ekadashi? What are the faults in not following Ekadashi properly? Please bestow your mercy upon me and tell about these subjects, as you are the only personality able to do so.”

Srila Vyasadeva, upon hearing this enquiry of Jaimini Rsi, became situated in transcendental bliss. “Oh brahmana sage Jaimini! The results of following Ekadashi can only be perfectly described by the Supreme Lord, Narayana, because Sri Narayana is the only personality capable of describing them in full. But I will give a very brief description in answer to your question.”

“At the beginning of the material creation, the Supreme Lord created the moving and nonmoving living entities within this world made of five gross material elements. Simultaneously, for the purpose of punishing the human beings, He created a personality whose form was the embodiment of sin (Papapurusha).

At this time Sri Bhagavan created the personality known as Yamaraj and the different hellish planetary systems. Those living entities that are very sinful will be sent after death to Yamaraj, who will in turn, according to their sins, send them tom a hellish region to suffer.

“After these adjustments had been made, the Supreme Lord, who is the giver of distress and happiness to the living entities, went to the house of Yamaraj, with the help of Garuda, the king of birds.

When Yamaraj saw that Lord Vishnu had arrived, he immediately washed His feet and made an offering unto Him. He then had Him sit upon a golden throne. The Supreme Lord, Vishnu, became seated on the throne, whereupon He heard very loud crying sounds coming from the southern direction. He became surprised by this and thus enquired from Yamaraj, ‘From where is this loud crying coming?’

“Yamaraj in reply said, ‘Oh Deva! The different living entities of the earthly planetary systems have fallen into the hellish regions. They are suffering extremely for their misdeeds. The horrible crying is because of suffering from the inflictions of their past bad karma (actions).’

“After hearing this Supreme Lord, Vishnu, went to the hellish region to the south. When the inhabitants saw who had come they began to cry even louder. The heart of the Supreme Lord, Vishnu, became filled with compassion. Lord Vishnu thought to Himself, ‘I have created all this progeny and it is because of Me that they are suffering.'”

Srila Vyasadeva continued: “Oh Jaimini, just listen to what the Supreme Lord did next.

‘After the merciful Supreme Lord thought over what He had previously considered, He suddenly manifested from His own form the deity of the lunar day Ekadashi.’

Afterwards the different sinful living entities began to follow the vow of Ekadashi and were then elevated quickly to the abode of Vaikuntha.

Oh my child Jaimini, therefore the lunar day of Ekadashi is the selfsame form of the Supreme Lord, Vishnu, and the Supersoul within the heart of the living entities.

Sri Ekadashi is the utmost pious activity and is situated as the head among all vows.

“Following the ascension of Sri Ekadashi, that personality who is the form of the sinful activity gradually saw the influence she had. He approached Lord Vishnu with doubts in his heart and began offering many prayers, whereupon Lord Vishnu became very pleased and said, ‘ I have become very pleased by your nice offerings. What boon is it that you want?’

“The Papapurusha replied, ‘I am your created progeny, and it is through me that you wanted distress given to the living entities that are very sinful. But now, by the influence of Sri Ekadashi, I have become all but destroyed.

Oh Prabhu! After I die all of Your parts and parcels who have accepted material bodies will become liberated and therefore return to the abode of Vaikuntha. If this liberation of all living entities takes place, then who will carry on Your activities? There will be no one to enact the pastimes in the earthly planetary systems!

Oh Keshava! If You want these eternal pastimes to carry on, then You please save me from the fear of Ekadashi. No type of pious activity can bind me. But Ekadashi only, being Your own manifested form, can impede me.

Out of fear of Sri Ekadashi I have fled and taken shelter of men; animals; insects; hills; trees; moving and nonmoving living entities; rivers; oceans; forests; heavenly, earthly, and hellish planetary systems; demigods; and the Gandarvas. I cannot find a place where I can be free from fear of Sri Ekadashi. Oh my Master! I am a product of Your creation, so therefore very mercifully direct me to a place where I can reside fearlessly.'”

Srila Vyasadeva then said to Jaimini, “After saying this, the embodiment of all sinful activities (Papapurusha) fell down at the feet of the Supreme Lord, Vishnu, who is the destroyer of all miseries and began to cry.

“After this, Lord Vishnu, observing the condition of the Papapurusha with laughter, began to speak thus: ‘Oh Papapurusha! Rise up! Don’t lament any longer. Just listen and I’ll tell you where you can stay on the auspicious lunar day of Ekadashi.

On the day of Ekadashi, which is the benefactor of the three worlds, you can take shelter of foodstuff in the form of grains.

There is no reason to worry about this any more, because My form as Sri Ekadashi Devi will no longer impede you.’

After giving direction to the Papapurusha, the Supreme Lord, Vishnu, disappeared and the Papapurusha returned to the performance of his own activities.

( Description from the fourteenth chapter of the Padma Purana, from the section entitled “Kriya-sagara-sara.” )

Therefore those persons who are serious about the ultimate benefit for the soul will never eat grains on the Ekadashi tithi.

According to the instructions of Lord Vishnu, every kind of sinful activity that can be found in the material world takes its residence in this place of foodstuff (grain).

It is definitely necessary that one give up eating grains on Ekadashi.

Whether one be a ksatriya, vaisya, shudra, or of any family, he should follow the lunar day of Ekadashi.

From this the perfection of varna and ashram will be attained.

Especially since even if one by trickery follows Ekadashi, all of his sin become destroyed and he very easily attains the supreme goal, the abode of Vaikuntha.”

So, are you following Ekadashi today? 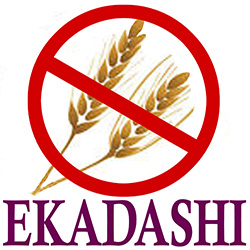