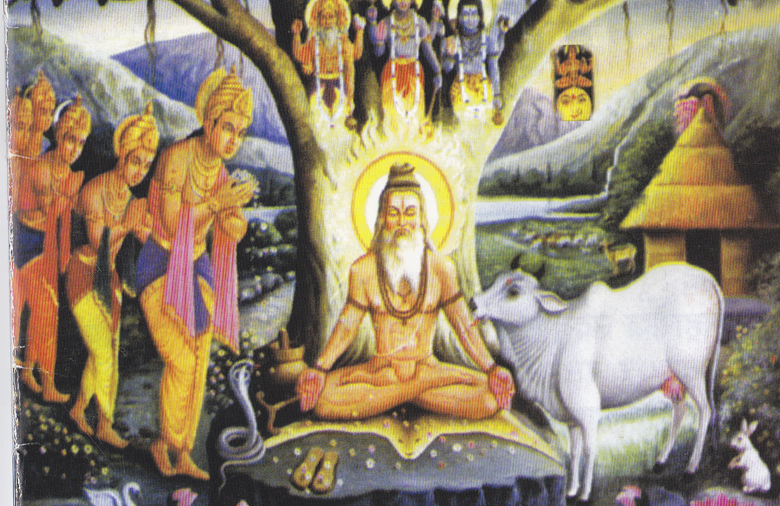 One of the great virtues of mankind is helping the needy people.

Many persons are considered brave for their virtue of giving away their wealth knowledge and tried with all their might to uphold this virtue. Indian mythology gives many extraordinary instances many persons which preferred giving away their body parts and wealth in order to give more preference to “DAAN” and “Tyaag” as it is referred in Hindu Mythology tales.

But Dadhichi rishi has been raised high above them all for his “Tyaag” and “Selflessness”.

The story of Maharshi Dadhichi and what he did because of which he is considered and the most generous of all in the Ancient Hindu Mythology.

During the War between Devatas and Rakshas(Demons). Demons had clearly dominated in the Warfield and robbed the Devatas of their arms and weapons using some new black magic powers which were far behind the comprehension of the gods.

The Devatas knew for sure that if they lose the rest of their weapons, no one could save their life.

So in order to make sure that their weapons are safe, they went to the Sage Maharishi Dadhichi who agreed to keep the weapons in his protection even neglecting the danger to his own life.

The “Rakshasas”(DEMONS) used all their might to rob those weapons and hurt Maharshi Dadhichi but in Vain. A long time passed and the gods’ didn’t come to take away their weapons.

Maharshi Dadhichi couldn’t think of any way by which he could always have an eye on the weapons at all time.

Finally, one day, with his divine Powers, he put all the weapons in his sacred water pot and mixed them in the water and drank it. He was now free and he could continue his regular penance undisturbed.

A short while after this, the Devatas returned and asked Dadhichi for their weapons.

Dadhichi Maharshi replied, “I waited a long time for you to come and collect your weapons. I thought you wouldn’t return back. So I drank them away”.

Devatas went on pleading “Maharshi, we are now in a position to fight Rakshasas.

If we do not have our weapons, we will not be in a position to fight with them and to save Dharma and the universe”. Dadhichi thought about it calmly and was convinced that Devatas deserved help.

Their weapons were now more powerful than before. He said to Devatas “Alright, take your weapons back by killing me. They are presently in the form of my bones”.

Devatas refused to do so and said “We certainly do not want to commit the sin of killing a great Rishi like you. We cannot afford to do this cruel thing”.

Now the weapons were inside the hermits’ body in form of flesh and bones and it was difficult to get them out. So he created a huge fire, entered into it and reduced his own body into flames.

Devatas were in the state of bewilderment as they couldn’t comprehend what was happening. Lord Brahma suddenly appeared and converted each of the bones into various powerful weapons and gave them to the Devatas. Dadhichi’s back bone was made “THE VAJRA” and was given to Lord Indra with which he brought an end to the most powerful Rakshasas like Vritrasur.

The power of the divine virtue and powerful soul made the weapons more Lethal than ever. This great sacrifice made his name flash in golden words whenever examples are given of sacrifice and selfless attitude.