Once, in a peaceful village, there lived a scholarly brahmana (priest).

Opposite his home, there lived a prostitute.

As a daily observance, the brahmana would sit in his doorway and recite the Gita.

Meanwhile, across the street, the prostitute would tend to her business.

As the years passed, the brahmana grew ever more disturbed by the prostitute. “Just see how lowly she is.” he would think to himself and continue with his recitation.

It so happened that both the brahmana and the prostitute died at the same time.

“What is this?” he protested. “There must be some mistake!”

Both the Yamaduttas and the Visnuduttas replied, “My dear brahmana, there is no mistake.

While you were busy meditating on the lowly activities of the prostitute, she listened to you recite the Gita and prayed that she could one day elevate herself to your position.

In this way the prostitute achieved liberation while you only degraded yourself.”

Moral of the strory:

And whoever, at the end of his life, quits his body, remembering Me alone, at once attains My nature. Of this there is no doubt.

Whatever state of being one remembers when he quits his body, O son of Kuntī, that state he will attain without fail.

What we will think at end of our life, depend from what we have done all our life. 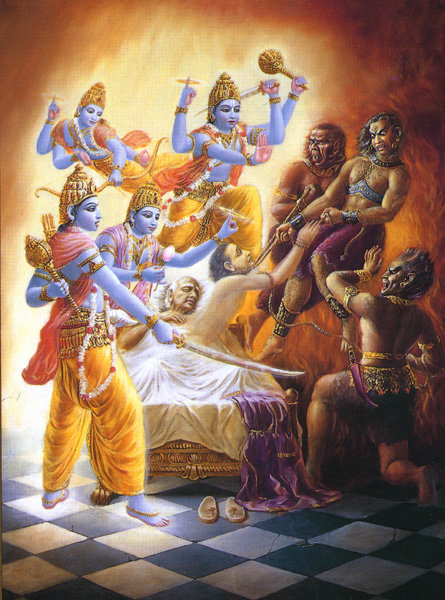