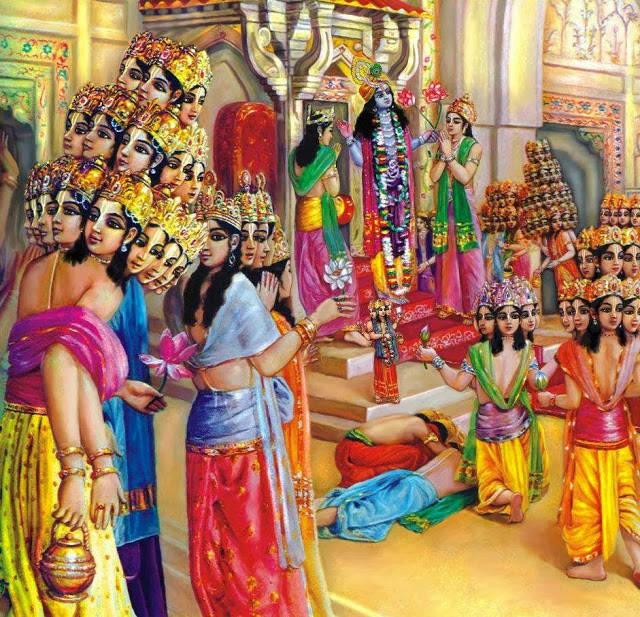 Once, when Krsna was ruling Dvaraka, Lord Brahma came to see Him, and the doorman immediately informed Lord Krsna of Brahma’s arrival.

When Krsna was so informed, He immediately asked the doorman, `Which Brahma? What is his name?’

When the doorman asked, `Which Brahma?’ Lord Brahma was surprised. He told the doorman, `Please go inform Lord Krsna that I am the four-headed Brahma who is the father of the four Kumaras.’

After being worshiped by Lord Brahma, Lord Krsna also honored him with suitable words. Then Lord Krsna asked him, `Why have you come here?’

Being questioned, Lord Brahma immediately replied, `I shall later tell You why I have come. First of all there is a doubt in my mind which I wish You would kindly dissipate.

`Why did you inquire which Brahma had come to see You? What is the purpose of such an inquiry? Is there any other Brahma besides me within this universe?’

Upon hearing this, Sri Krsna smiled and immediately meditated.

There also arrived many Lord Sivas with various heads numbering one hundred thousand and ten million. Many Indras also arrived, and they had hundreds of thousands of eyes all over their bodies.

When the four-headed Brahma of this universe saw all these opulences of Krsna, he became very bewildered and considered himself a rabbit among many elephants.

All the Brahmas who came to see Krsna offered their respects at His lotus feet, and when they did this, their helmets touched His lotus feet.

No one can estimate the inconceivable potency of Krsna. All the Brahmas who were there were resting in the one body of Krsna.

With folded hands, all the Brahmas and Sivas began to offer prayers unto Lord Krsna, saying, `O Lord, You have shown me a great favor. I have been able to see Your lotus feet.’

All of them then said, `It is my great fortune, Lord, that You have called me, thinking of me as Your servant. Now let me know what Your order is so that I may carry it on my heads.’

Lord Krsna replied, `Since I wanted to see all of you together, I have called all of you here.

`All of you should be happy. Is there any fear from the demons?’

They replied, “By Your mercy, we are victorious everywhere”.

“`Whatever burden was upon the earth You have taken away by descending on that planet.’

This is the proof of Dvaraka’s opulence: all the Brahmas thought, `Krsna is now staying in my jurisdiction.'”Thus the opulence of Dvaraka was perceived by each and every one of them. Although they were all assembled together, no one could see anyone but himself.

Lord Krsna then bade farewell to all the Brahmas there, and after offering their obeisances, they all returned to their respective homes.

After observing all these opulences, the four-headed Brahma of this universe was astonished. He again came before the lotus feet of Krsna and offered Him obeisances.

Brahma then said, `Whatever I formerly decided about my knowledge, I have just now had personally verified.’

`There are people who say, “I know everything about Krsna.” Let them think in that way. As far as I am concerned, I do not wish to speak very much about this matter. O my Lord, let me say this much. As  far as your opulence’s are concerned, they are all beyond the reach of my mind, body and words.’ This is a quotation from Srimad-Bhagavatam (10.14.38), spoken by Lord Brahma.

Krsna said, Your particular universe extends four billion miles; therefore it is the smallest of all the universes. Consequently you have only four heads.

Some of the universes are one billion yojanas, some one trillion, some ten trillion and some one hundred trillion yojanas. Thus they are almost unlimited in area.

According to the size of the universe, there are so many heads on the body of Brahma. In this way I maintain innumerable universes [brahmandas].

Beyond the River Viraja is a spiritual nature, which is indestructible, eternal, inexhaustible and unlimited. It is the supreme abode consisting of three fourths of the Lord’s opulences. It is known as paravyoma, the spiritual sky.