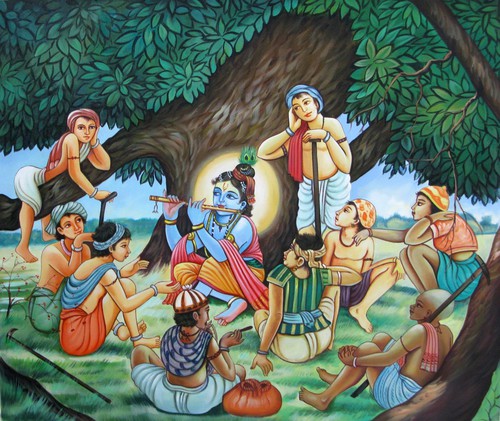 One day Vrajaraja Nanda and Yasoda spoke about their son, the van­quisher of many demons. “When Krishna is out playing He likes to wander off alone leaving the powerful Balarama behind.
We should hire some­one to supervise Their play, and send some expert servants to accompany Them. Let them wander all over Vrndavana serving our two boys.”

Shortly later, Nanda engaged some servants to take care of his boys.

Every morning after leaving their respective houses, the cowherd boys came to the home of Krishna and Balarama.

The meeting of Krishna and Balarama with Their friends and servants looked like a king meeting his ministers and advisors.

As a baby elephant picks up dirt with his trunk and throws it all around, Krishna entered the open fields of the village, and playfully covered Himself and His friends with vraja-raja (dust of Vrndavana).

At this time Krishna used to sport with both young boys and girls of the same age.

Sometimes Krishna quarreled with the gopas and gopis and beat them, and other times they beat Him.

Krishna responded by laughing, getting angry, or by not reacting at all.

Playing in the dirt Krishna, built houses, a toy wall, or a small town.

Other times He broke the dirt houses of His friends and they broke His.

When Krishna rebuilt His house, they would break it again.

While curiously observing these antics from the sky, the demigods thought, “Simply by His glance thousands of unlimited universes come into existence and then again are dissolved. Instead of bothering with that work, He now plays in the dirt making roads, homes, and villages. Although He is becoming ex­hausted from doing this, He does not give it up.”

Krishna’s perplexing pas­times captivated the minds of the demigods.

While Krishna delighted in the dirt, He looked like the sun shining in the sky.

The housewives of Vrndavana, full of motherly affection, addressed Krishna with sweet words, “O darling boy! Please come to our beautiful courtyards, play with our children, and take some food.”

Hearing this, Krishna smiled and replied softly, “I cannot come because I do not have any spare time.”

Thus the all-attractive beloved of every mother’s heart cleverly responded to the elderly gopis.

Anxious to express their motherly affection toward Krishna, these impatient gopis held His hand and hurried to their homes.

In their eyes, fortune had blessed Krishna alone as the sole recipient of matchless beauty.

Brimming with love, the elderly gopis served Krishna by rubbing His body and bathing Him. With great devotion they fed Him butter, radbri and ksira, and then sent Him home.
( From book Ananda Vrindavan Champu by Kavi Karnapura )