Jagannath lila: Service but not darshan! 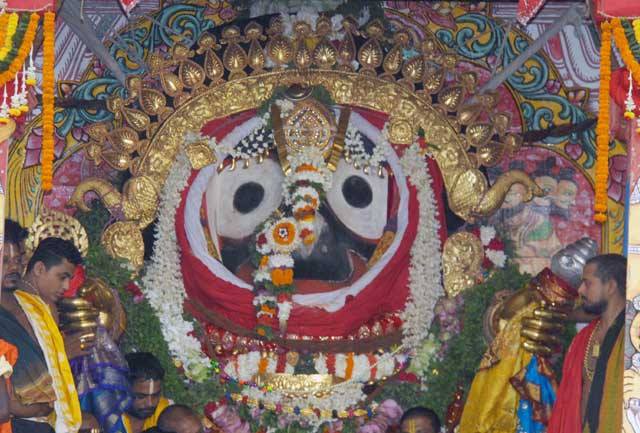 Once there was a brahmana who lived just next to Lord Jagannath temple in Puri.

Everyday he used to supply water to the temple but not even once did he went to have the darshan of the Lord in the temple.

When somebody asked him why he is not entering into the temple and having the darshan of the Lord, the brahmana said that the temple is just nextdoor.

So anytime he can have the darshan.

Everytime he said, “kal darshan karoonga – Tomorrow I shall have darshan”.

In this way he was telling kal , kal, kal..” tomorrow, �tomorrow�, tomorrow. And one day kaal, i.e time in the form of death came and he died without having darshan of the Lord.

There are so many things which we can win over in this material world.

But there is one thing over which we have no control and that is time.

Nobody can capture time. It just slips away.

“Both by rising and by setting, the sun decreases the duration of life of everyone, except one who utilizes the time by discussing topics of the all-good Personality of Godhead.”

Thus with every sun rise and sun set, the duration of our life is taken away and we cannot get it back even if we are prepared to pay millions of dollars.

Such is the effect of time, which is a forceful representative of the Lord.

But nobody wants old age, disease or death.

Then what is the way to overcome the effect of time?

If we engage ourselves in the topics of Krishna, then the sun cannot take away that time.

If we engage ourselves in Krishna katha, then we understand about the birth and activities of the Lord and one who understands this, after giving up this body, gets an eternal spiritual body to be with Krishna.

“One who knows the trannscendental nature of My appearance and activities does not, upon leaving the body, take his birth again in this material world, but attains My eternal abode, O Arjuna.”

Thus by discussing Krishna katha we are guaranteed eternal life.

Is there any better bargain than this?

“In this age of kali, the Holy name of the Lord, the hare Krishna Mahamantra, is the incarnation of Lord Krishna. Simply by chanting the holy name, one associates with the Lord directly. Anyone who does this is certainly delivered.”