Important story: Butcher and a Brahmana! 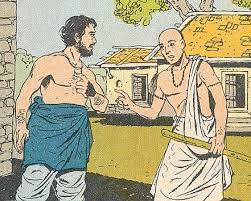 Once a poor butcher purchased a cow to sell her meat for money to maintain his family.

But while taking her to slaughter, she got loose and the butcher chased her till she was out of sight.

One could not recognize this man as a butcher because he was wearing ordinary clothes.

Tired from chasing the cow, the butcher took a rest at a junction where he saw a Brahmana named Sadan and asked him if he saw a runaway cow and if so what direction she went.

Without considering the person’s motive, the truthful Brahmana pointed in the direction the cow went.

Following the Brahmana’s guidance, the butcher found the cow, butchered her and sold her meat.

Hence the Brahmana was implicated with sin because he did not consider whom he helped and for what purpose.

Thus after his death the Brahmana reached hell, received punishment, took his next birth as a butcher and was given the same name, Sadan.

He had indicated the direction the runaway cow went using his hand; thus in this life as a butcher his hands got cut off while performing his business.

The Brahmana Sadan was very learned and regularly chanted the Lord’s names, but due to one mistake done unknowingly, he had to take rebirth as a butcher who lost both his hands.

Therefore one should be careful whom they extend help to, because helping in an unworthy cause may lead to suffering.

Philanthropic donations for a good cause, if used correctly, are worthy.

Considering this incident, it should be understood that giving charity out of pity should be done very cautiously.

Nowadays many people build temples to make an external show of devotional life, but they operate them like social clubs.

Many even persuade atheists to become members to attract their money to perpetuate their hypocrisy.

Giving charity to such people will not benefit one.

Lord Krsna states in the Bhagavad Gita that charity should only be given to those who are scriptural authentic.

Charity given out of duty, without expectation of return, at the proper time and place, and to a worthy person is considered to be in the mode of goodness.

But charity performed with the expectation of some return, or with a desire for fruitive results, or in a grudging mood, is said to be charity in the mode of passion.

And charity performed at an impure place, at an improper time, to unworthy persons, or without proper attention and respect is said to be in the mode of ignorance.