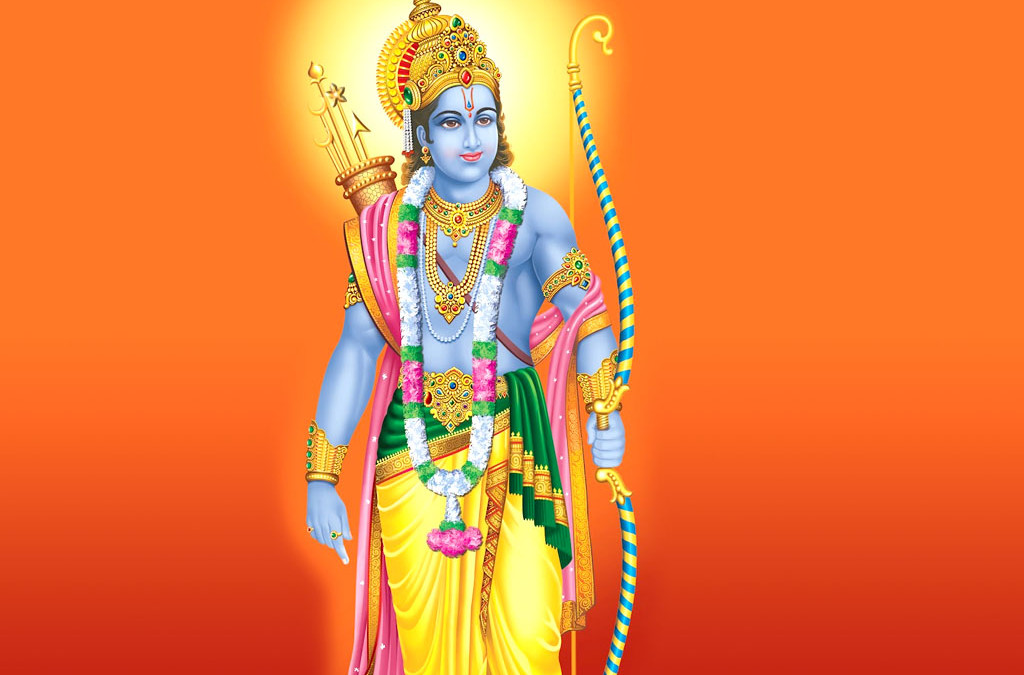 Once a devotee reached a sinner who had never performed even one pious deed, held his hand and said, “Say Rama.”

To this the sinner responded, “Let go of my hand and go away you hypocrite.”

Because the devotee was young and strong the sinner could not snatch his hand away from the devotee.

The devotee said, “Until you say the name Rama I will not release your hand.”

The sinner became angry, spoke abusive words and pushed the devotee, but the devotee did not release him.

When the sinner became dispirited he reluctantly said Rama.

The devotee then said, “Do not sell the purity earned from chanting Rama at any time.”

To this the sinner said, “Go away you fool, you have given me something valuable and you are asking me not to sell it, ridiculous.”

Afterward the devotee left for pilgrimage.

In due course the sinner died and was thus taken by the Yamadutas to hell for punishment.

When Chitragupta, Yamaraja’s secretary, examined the account of the sinner’s life, he could not find any piety; thus he told Yamaraja,

“This person is a big sinner, he had never performed any pious deeds, except for one day a devotee pushed him to say Rama.”

Then Yamaraja said to the sinner, “Do you want to first enjoy the merit resulting from your chanting Rama or would you like to experience the results of your sins first?”

At that moment, the sinner remembered the devotee who had told him to say Rama, state, “Do not sell this name.”

The cunning sinner thought to use this information in this dire situation.

He asked Yamaraja, “Please tell me the value of Rama’s name. I want to exchange its merits for my suffering here.”

Yamaraja responded, “The value of Lord Rama’s name is very vast, but how vast it is I do not know.”

The sinner then said, “Please take me to someone who knows its value.”

Yamaraja thought, I also want to know its value, then said, “Lets us go to Indra, the King of Heaven, for clarification.”

The clever sinner then said, “I do not want to walk there, you have to take me by palanquin.”

Because Yamaraja’s messengers are not allowed to enter heaven, Yamaraja and Chitragupta carried the palanquin.

From a distance Indra saw Yamaraja bringing someone to him on a palanquin and thought, this person may be a great devotee; therefore as soon as they entered his palace, Indra offered him respects.

After asking of Yamaraja’s well being, he asked who the person on the palanquin was.

Yamaraja said, “What can I say about this person, you have already extended your respects to him. He is a sinner and wants to know the value of his once chanting Lord Rama’s name. Just to know its value we have come here.”

Lord Indra then answered, “The whole creation, all wealth, all happiness, victory, all perfections and trances, if combined, cannot equal to once chanting Lord Rama’s name. I do not know any more than this, but Lord Brahma may know. Let us go there, I also want to know the value of it as well.”

Upon deciding to go to Lord Brahma’s abode, Lord Indra and Yamaraja had to carry the palanquin because Chitragupta was not allowed to enter there.

Lord Brahma, seeing Lord Indra and Yamaräja bringing someone on a palanquin thought, “The person sitting upon the palanquin may be a great soul.” Hence Lord Brahma offered him praises with full respect and then asked for his introduction.

Yamaraja then said, “What can I say, you have already praised him. He is a great sinner and wants to know the value of once chanting Rama. We did not have the answer, which is why we came to you.

Therefore, please tell us the value of saying the name Rama.”

Upon seeing Lord Indra and Yamaraja carrying a person on a palanquin before him, Lord Siva embraced him and immediately asked for his introduction.

To this Yamaraja said, “What introduction can we give about this person, you have already embraced him. Still, let me tell you that he is a great sinner and wants to know the exact value of once chanting the name Rama.”

Lord Siva glorified the Lord’s name with all of his five heads and then said, “I only know what I have said, I do not know anything more, only the Lord knows its complete value.

Let us go to Him because I also want to know the value of chanting the name Rama.”

After saying this, Lord Siva brought everyone to the Milk Ocean where the Lord resides. There they heard a voice stating, “Who is there and what do you want?”

Lord Siva and Lord Brahma answered, “We have brought a great sinner with us who wants to know the value of saying Your name.”

After hearing Lord Siva and Lord Brahma’s statements, the Lord said, “You first both lift him on your shoulders and place him on My lap, then I shall tell the value of chanting My name.”

Lord Siva and Lord Brahma obeyed the Lord’s command and also wanted to know the value of chanting His name and thus lifted the sinner on their shoulders and placed him on the Lord’s lap.

Then the Supreme Lord said to both Lord Siva and Lord Brahma, “This is the value of chanting My name.

A person who repeats My name purely becomes free from all sins of this world and comes to Me by climbing on your shoulders to sit upon My lap.”

Even though the sinner had begrudgingly chanted Rama, he received the same result as a person would receive from chanting it purely because the devotee who had taken his hand had blessed him. Blessing received from a pure devotee carries so much value.

Ajamil had accumulated unlimited sins during his lifetime, yet they were all burnt to ashes just by his chanting the name Narayana once.

Upon Ajamil’s death three Yamadutas went to retrieve him, but upon his chanting the name Narayana, four Visnudutas came to his aid and prohibited the Yamadutas from taking him.

Such is the glory and value of chanting the Lord’s name.

Therefore one should always repeat the Lord’s names, because by doing so, at least one time one name will come out purely.

Now one may wonder, if by chanting Lord Narayana’s name once four messengers went to Ajamil, how many messengers will come to a person who repeatedly chants Lord Rama’s names?

To this Lord Siva states in the Mahabharat:

Through this verse we can determine that at the time of death, if someone repeats the name of Lord Rama, one thousand messengers of Lord Visnu will come to them.

The Lord’s name has unlimited powers. repeating Rama once one thousand messengers of Lord Visnu come, then how many messengers will come if someone repeats the name of Lord Krsna?

We find the answer to this question in the Padma Puraëa where Lord Siva states:

“Whatever merit is earned by repeating the meritorious Visnu Sahasranama (one thousand names of Lord Visnu in Sanskrit Verses) three times is gained just by repeating Lord Krsna’s name once.”

Lord Sri Krsna is the Lord of all the Lords; therefore, just by repeating His name once, twelve thousand (4 x 1,000 x 3=12,000) of Lord Visnu’s messengers come to the aid of the chanter.

Simply by looking at medicine one cannot realize its potency; its medicinal quality can only be realized by consuming it.

Similarly the potency contained in the Lord’s name can only be realized by chanting it purely.

To achieve the best result, the Lord’s names should be chanted after receiving initiation from a doctor-like, scripturally authentic Guru; only then can the tie to the repetition of birth and death be cut.

Just as when a disease is properly diagnosed and the prescribed remedy is followed the patient becomes cured, similarly chanting the holy name of the Lord properly as prescribed by an authentic Guru will surely cure the disease-like problems of this material existence.

Sri Sukadeva Goswami states that only one with a purified heart can know the potency and the glory of the Lord’s names.

Hence, one must practice chanting purely to acquire a purified heart to realize the potency of the Lord’s names.

Somehow or other one should carry on repeating the Lord’s names, because by repeating them one only benefits.

For example, When Ajamil saw the ferocious Yamadutas on his deathbed and cried out to his son Narayana for help, he was not directing his cries to the Lord, which the Yamadutas relayed to the Visnudutas.

“All the learned great sages have said that the Lord’s name is so powerful that even if it is repeated to indicate to someone other than the Lord; repeated jokingly; sung in praise with accompaniment; or while criticizing it or repeating it with disgust, it still removes unlimited sins of the repeater.”