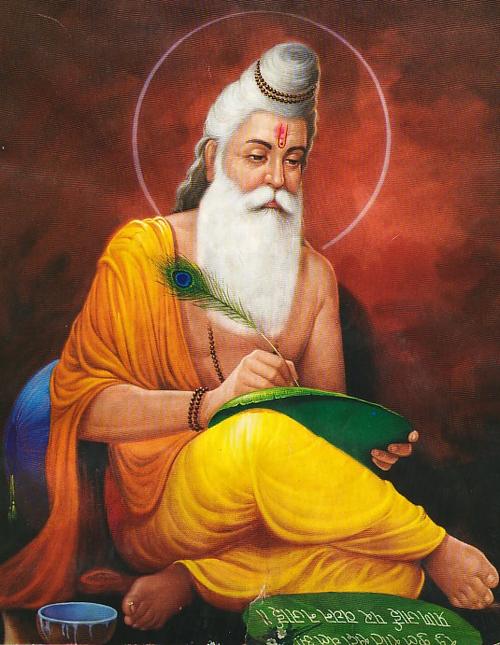 In his previous life prior to becoming hunter and great sage was young saintly boy rishi kumara studying in ashram of his guru.

Near that ashram was living brahmana.

So one day brahmana while working with weapon, weapon fall and hit calf who died.

Brahmana filled very distress that has given pain to another living entity.

Everyone started speaking how this brahmana has killed calf.

Brahmana was thinking that the best thing would be to finish his life. But before that he went to nearby ahram of a sage

to ask him what is to be done.

When he went in ashram, sage was absent. He has gone for few days.

But Valmiki as boy was there.

Brahmana asked where is the rishi, and Valmiki replyed that he has gone for few days.

As young 12 years boy ,Valmiki insisted to tell him what is the matter, so brahmana explained.

Brahmana become very happy, Oh only 4 times Rama and sin will go away!

Brahmana went at his home and chanted Rama and become happy.

Back at ashram sage has returned back. He asked boy if anyone has come this days for me?

By hearing this sage become very furious and angry.

1) We should be very careful in causing distress to any living entity. That will be cause also for our own suffering in life.

2) Be careful with giving advice’s to others. By giving advice we become very much responsible for what people do after that.

3) Holy name of Rama is supremly powerful. But we should not make ofence thining that we can do any bad think we want and by chanting we will

be free from all bad karma.