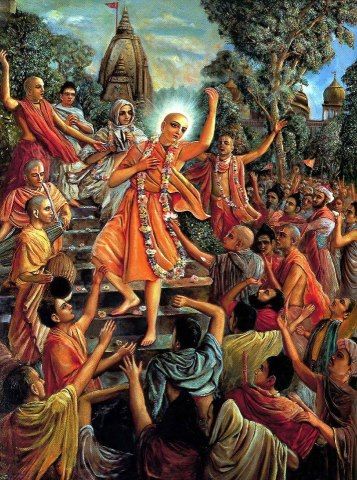 Once Lord Gauranga with his companions came to a washerman who was beating the clothes upon a piece of plank.

He asked the washerman to say ‘Hari Bol!’.

The washerman thought that the mendicants had come to beg alms from him.

He said to Gauranga, “Oh mendicant, I am very poor. I have nothing to give you.

Gauranga said, “I do not want anything from you. Say ‘Hari Bol!’ at least once”.

He thought he would be required to pay something to the mendicant.

He said, “I am very poor. I cannot give up beating the cloth in order to utter the Name you have given to me”.

Gauranga said, “I shall do the beating of the cloth. Please say, ‘Hari Bol!'”.

Then Gauranga asked him to repeat the same twice. The washerman repeated twice.

Then the fire of devotion started.

The washerman repeated the name unasked. He began to dance in ecstasy raising both his hands high.

She also noticed that her husband had no consciousness of his surroundings. She tried to rouse him by calling him loudly but in vain. She was frightened.

She ran to the village and said to the relatives and neighbours, “A ghost has taken possession of my husband. Please help me. Drive away the ghost from him”.

They all proceeded immediately to see the washerman. He was still dancing in ecstasy.They were afraid to go near him.

At last a bold man caught hold of the washerman and tried to stop his dancing.

He too caught the contagion and began to dance with the washerman uttering, “Hari Bol! Hari Bol!”. He embraced the onlookers.

They too caught the contagion and danced in ecstasy. The people of the whole village were affected. Gauranga enjoyed the scene for some time and left the place.