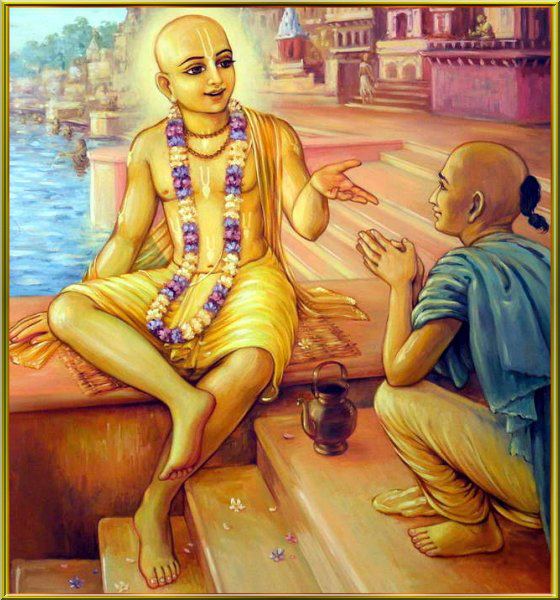 There is story  Caitanya Caritamrita which indicates the glory and power of the holy name of the Lord.

There was a devotee, Actually he was working for the government his name was Subudhi Rai.

Subudhi Rai was quite a wealthy man he had much power and he had one servant who was very young and one day actually he would care for his servant just as father care for his son he would give him great fatherly concern, care and affection but one day because his servant was misbehaving out of affection for him to teach him he whipped him.

Later on Subudhi Rai retired he gave his high post to his servant it was at that time he was married a nice young girl .

So he told this story and she became very angry so she said you must kill Subudhi Rai ,you must have him punished by death for doing this .

How can I do this he is like my father he is so kind to me. She said either you put him to death or I leave you.

So he was ‘thinking he is like my father and she is my beloved wife what to do?

He was in dilemma so he thought an idea that to cause a Hindu in those days to be rejected by Hindu society is worse than death.

So they had this very ritualistic way of making a Hindu an outcast .

What he did he takes some water from the drinking pot of a Muslim and sprinkled on the head of Subudhi Rai and simply because of that he was rejected by the Hindu Society.

Of course he did not want to be rejected, so he went place to place asking people how he could be reinstated in his position as a Hindu.

He went to one man who was a so called saintly person and said “what am I to do they sprinkled water from Muslim pot on my head”.

He said “O’ they put water from Muslim pot on your head there is nothing you can do to become a Hindu again you are finished”.

So he went to another and he said “O water from Muslim pot on your head nothing I can do there is nothing any one can do you are an out cast for life”.

He went to one man he gave him a way of hope he said contaminated water on your head there is one thing you can do, you take ghee and you burn it to the point of great heat where it is smoking and smoking practically boiling and then you drink it all”.

He Said but if I drink it all I will die. He said yes you will die but because the ghee was pure then in your next birth you will get to be a Hindu but there was some more things, but he kept searching just so that he can find something a little nicer.

You will not only become a Brahmana but you will become the highest, most elevated saintly person.

You will become a pure devotee of the Lord which is beyond all these socio religious designations. So naturally Subudhi Rai, he considered that this is the nicest proposal.

He began to chant the Holy Names of the Lord and he became the most exalted devotee, so exalted that he went to Vrindavan and simply dedicated his life to serving all the devotees.

Whenever the Bengali devotees of Mahaprabhu would come to Vrindavan they would usually have indigestion because they were used to eating rice but in that pat of India all that was there was chapattis.

So somehow or other he would go out and collect wood from the forest and sell it and with whatever money he would make he would buy rice and feed it to the Bengali Vaishnavas.

So in this verse it is clearly explained that from the point of view of the Supreme Personality of Godhead who is speaking here in His incarnation of Lord Kapila “There is nothing more pleasing to Him than one who chants the Holy Name of the Lord in a pure and humble state of mind.”