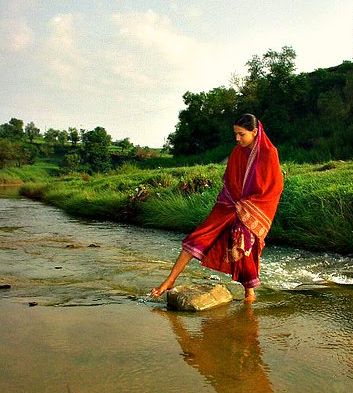 There was a very learned brahmana pandit. He was very good in Vedic Rituals and a very respected man.

A young cowherd girl Lakshmi used to bring milk from the other side of the river. She woke early in the morning, bathed the cows and milked them.

She even cooked for her old father and set out to deliver milk. She used to pray that the boatman comes in time so that she can deliver the milk to the brahmana in time.

One day the boatman was late and the cowherd girl was late in bringing the milk. The brahmana requested her to bring the milk before sunrise.

But the next day when she reached the shore, the boatman was not there. Unfortunately she was late again.

The brahmana was very annoyed with her.

She explained that she cannot cross the river without the help of the boatman and she takes up the first boat to bring him the milk.

The brahmana proudly told Do you know how much I have read, how much scholars respect me and now I am disregarded by a mere milk maid.

People cross the ocean of life by chanting the name of Hari and you cant even cross a small river!

Lakshmi took this seriously in her heart and thought I wish Panditjii had told me this solution early.

Next day she reached very early and greeted panditji. He was pretty surprised to see her coming without a boat. He asked her, how she managed to come so early.

She innocently replied The way you told me panditji, by chanting the name of Hari. And walked back over the water and called him to follow.

Panditji followed her but was very careful of his silk dhoti rather than to chant the holy name. Eventually he fell down.

The cowherd girl remarked, oh Panditji you were not thinking of Hari at all. Now panditji realized that he was proud of learning and had no pure devotion towards the Lord.

Only by pure loving devotion one can achieve the mercy of the supreme Lord.

The weeds of Pratistha asha must be uprooted, otherwise it will be show bottle devotion as the Panditji ,who had full knowledge of shastras but his faith in the name of God was not there.

But this cowherd uneducated girl had full faith and devotion on the Holy Name and was able to cross the river. Her only aim was to do her duty sincerely and satisfy her master.

“Neither religious activities endowed with honesty and mercy nor knowledge obtained with great penance can completely purify ones consciousness if they are bereft of loving service to Me.”

This verse is very apt, as whenever we are given a service, we feel that one must do an important service where we can come to limelight of devotees and be recognized.

But we do not understand that our devotional service is to please Krishna. But general tendency for a rascal is to want people to recognize the work and appreciate.